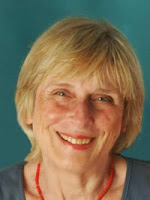 Hi everyone, I’m very excited to share with you a Q&A with Eva Etzioni-Halevy on her book The Triumph of Deborah. I was browsing her site the other day and read the Q&A and found it so interesting that I asked her if I could post it on my blog and she readily agreed. I really loved this book, it was great. You can read my review here. Stay tuned for a GIVEAWAY at the end of the interview.

1. This is your third novel written about biblical heroines. What about Deborah’s particular story did you find compelling?

I found Deborah’s personal tale, as described in the Bible, particularly intriguing. The scripture tells us that when Deborah instructed warrior Barak to go out to war against the Canaanites, who threatened Israel with destruction, he demanded that Deborah accompany him to the battlefield. It further recounts that she ended up going with him to his hometown as well. Yet she was a married woman and a mother, and the text does not indicate that the husband, Lapidoth, accompanied her, and certainly her children would not have gone out into the battlefield.

Long before deciding to write the novel, as I read the story, I began asking myself: what did her husband have to say about that? What would ANY husband say if his wife went off to distant parts with another man? It makes good sense that this created marital problems between them. Would they be able to overcome those problems? Further, I asked myself, what transpired between Deborah and Barak when they were together with no husband in sight? These were the aspects of Deborah’s story that I found most compelling, and they prompted me to write the novel, in which I used my imagination to answer these questions.

2. You’ve had to do a significant amount of research in the past to write about the ancient Israelites. Did this new book require new research?

In addition to the research I used for my previous novels, I visited the major sites in which the action of THE The Triumph of Deborah takes place, not once, but twice. These sites include the River Kishon, Mount Tabor, Hazor, where there are excavations of King Jabin’s castle (although you need to use a bit of imagination to visualize how it looked then, in contrast to what it looks like now), and a nearby museum that displays artifacts from the castle.

By the way, as a teenage girl, I lived for three years in a town, which is close to both the River Kishon and Mount Tabor, so I have been familiar with the sites since my youth.

3. One of the subjects of the novel is judgment. There’s Deborah’s revered judgment atop the Mountains of Efraim; the Canaanites’ judgment of the Israelites, and vice versa; and then individual characters judging one another (with or without enough information to make a sound judgment). Did you have a particular theme in mind when you began writing the novel? Did it ever change? What would you consider the most powerful message of the book?

The theme of judgment is certainly prominent in the novel. But, importantly, The Triumph of Deborah brings to life one of the most beloved biblical figures, Deborah, who was not “merely” what we might call today the Chief Justice of the land. In addition, she was also a prophetess, that is, the highest religious authority and an adored political leader, something in the nature of a contemporary president. Arguably, Deborah, was the most eminent woman in the Bible (Old Testament.)

To my mind, the most powerful message of the novel, directly based on that of the Scripture, is that Deborah succeeded in attaining this outstanding position, despite the fact that the circumstances for women—their legal position and status in the family—were most limiting at the time.

Further, the novel shows that, in her own life Deborah was very much a woman, and that her femininity did not detract from her stature as national leader. Thereby it pays tribute to Deborah’s feminine strength and independence from which present day women, seeking to build lives of their own and assert themselves in whatever they choose to do so, may derive inspiration.

The lesson that women today can learn from Deborah is: “I can do it. No matter how difficult the circumstances, I can overcome them.”

As with Deborah, so also with women attaining high-ranking positions today: There is no evidence to show that they are less feminine (attractive, gentle, showing empathy to others, motherly) than stay-at-home moms.

Finally, The Triumph of Deborah describes a prominent woman leader who led her people to war but also to peace. Hence it should be of special relevance in an American presidential election year in which a female candidate is a front runner, a year in which the topic of female leadership in time of war and peace will be most prominent on the agenda.

The message that emerges between the lines of the novel is that a woman leader is capable of leading her nation to war whenever necessary, and to peace whenever possible.

4. Do you see yourself continuing to explore your roots through these stories about biblical heroines? What do you find most rewarding about creating historical fiction that is also based in your faith?

It so happened that rather late in life, as part of searching for my Jewish roots, I began reading the Bible on my own, and I was fascinated by it.

What enthralled me was that the people described in it, although they lived thousands of years ago, were so strikingly similar to us in their hopes and fears and anxieties. That so much has changed, yet human nature has not. I took an amazing journey thousands of years back in time, yet when I arrived, I felt myself back at home.

I was also enchanted by the fact, that the people in the Bible, even the most exalted heroes and heroines, are described not as angels, but as true human beings, with strengths but also with weaknesses, many of which stemmed from their sexuality, and also by the fact that the women in particular are presented as intensely sexual persons.

I began to identify in particular with the women, whose feelings and impulses I could visualize as if they were my own. So I began to write about them, stories of love and betrayal and redemption through more love and friendship, written for reading pleasure, yet meticulously faithful to the Bible—a divine, yet also a very human collection of books.

What I find particularly rewarding is that I was attracted to those heroines as part of searching for my roots in my faith, and the more I wrote, the more my faith was strengthened. Certainly I hope to continue in this vein.

5. Are you writing anything new right now? What can we expect to see from you next?

I am now working on my fourth novel about women in the Bible, temporarily named The Ruse of Tamar. It concerns the second Tamar in the Bible, the daughter of King David, she who was the victim of incestuous rape by her brother Amnon. Based on the biblical text, the novel depicts the trauma that the abuse caused the young girl to suffer, and then goes on to show how in time she succeeds in rebuilding her life through her feminine strength and her love for a mysterious young man, whose true identity is revealed only toward the end of the novel.

All this takes place against the backdrop of various intrigues in King David’s court, which are described in the Bible, and elaborated on in the novel.
However, the novel is still at an initial and rudimentary state, and I can only hope that my readers will bear with me for a while, until I bring it to its conclusion.

What a great interview! I found it really interesting to see that she visits the sites she writes about and even as a young girl lived in a town that was close by. I also like the clear message that she gives that women ‘can do it’. We are strong and we are capable. You can visit her website here for more information on her and her books.

So, onto the GIVEAWAY. Eva has graciously agreed to send a signed copy of The Triumph of Deborah to one lucky winner! (Keep in mind she lives in Israel so the copy may take a few weeks to get to you). So, onto the rules:

This giveaway is open to anyone, anywhere. I will draw for a winner on Monday, October 20, 2008. Good luck everyone!