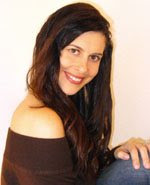 Hi everyone, Michelle was nice enough to sit down and answer a few (OK, a bit more than a few) questions I had for her. As you know she is the author of Nefertiti (my review here) and The Heretic Queen (my review here). So grab a cup of your favorite beverage and enjoy. Make sure to check out the trailer for her new novel at the end.

1. Why did you choose Ancient Egypt as your focus for your novels?

My travels to archaeological sites around the world have been enormously influential in my writing career. In fact, my inspiration to write on the Egyptian queen Nefertiti happened while I was on an archaeological dig in Israel. During my sophomore year in college, I found myself sitting in Anthropology 101, and when the professor mentioned that she was looking for volunteers who would like to join a dig in Israel, I was one of the first students to sign up. When I got to Israel, however, all of my archaeological dreams were dashed (probably because they centered around Indiana Jones). There were no fedora wearing men, no cities carved into rock, and certainly no Ark of the Covenant. I was very disappointed. Not only would a fedora have seemed out of place, but I couldn’t even use the tiny brushes I had packed. Apparently, archaeology is more about digging big ditches with pickaxes rather than dusting off artifacts. And it had never occurred to me until then that in order to get to those artifacts, one had to dig deep into the earth. Volunteering on an archaeological dig was hot, it was sweaty, it was incredibly dirty, and when I look back on the experience through the rose-tinged glasses of time, I think, Wow, was it fantastic! Especially when our team discovered an Egyptian scarab that proved the ancient Israelites had once traded with the Egyptians. Looking at that scarab in the dirt, I began to wonder who had owned it, and what had possessed them to undertake the long journey from their homeland to the fledgling country of Israel.

On my flight back to America I stopped in Berlin, and with a newfound appreciation for Egyptology, I visited the museum where Nefertiti’s limestone bust was being housed. The graceful curve of Nefertiti’s neck, her high cheekbones, and the faintest hint of a smile were captivating to me. Who was this woman with her self-possessed gaze and stunning features? I wanted to know more about Nefertiti’s story, and thus began my forays into writing historical fiction set in ancient Egypt.

2. Have you always wanted to be a writer? Any advice for budding writers?

Some authors come to writing by chance, some after graduating college or working for a while. For me there was never any doubt about what I would do as a career. I think my teachers felt the same way. I can remember being in third grade with the toughest teacher in the world and hearing her voice echo in my mind like a scene from Ferris Bueller’s Day Off. “Michelle… Michelle…. Michelle?” Only I wasn’t physically absent like Bueller. Just mentally! When I write, the scene unfolds in my mind like a movie, only I’m the director. I can listen to characters’ dialogue, then tell them to stop, do it over, say the words differently, or strike a different pose. In an academic setting this can be a problem, because instead of learning Calculus I’m watching a movie, only it’s a movie with endless possibilities because I create the scenes.

As for writing advice, I’m afraid it’s rather trite, but here it is: Keep writing. If at any point along the way I had stopped writing and said to myself, you know, I think book number eleven will be my last, I wouldn’t be published. Writers don’t like to hear this, though. I know when I was looking at writing advice and I would see this posted somewhere I would think, well that’s helpful. I wouldn’t have thought of that. But the truth is there’s no good-ol-boys-club and there’s no backdoor into the publishing industry (unless you’re already a star). Good work sells, and if it doesn’t, write another one, then maybe once you’re a success they’ll haul out all of your old books that weren’t worth publishing the first time around, spruce them up a little, and voila, all of your previous efforts won’t have been wasted. Or maybe you’ll look back on those books and think, wow, they knew something I didn’t. My work has gotten better. And then you’ll hide those first eleven books in a closet somewhere (or a craftily labeled folder in My Documents so that no one ever finds them).

3. How has your life changed since being published especially with Nefertiti being such a success and I’m sure The Heretic Queen will follow just the same?

Actually, my life hasn’t changed a whole lot – outside of the fact that my trips to archaeological sites are now tax deductable! I still travel extensively, I still read a great deal. Perhaps the biggest difference is that now I write full time, although what that really translates into is that I work twice as hard as I ever did before!

4. You have been really awesome in your willingness to work with bloggers. Do you feel they play a big part in a novel’s success?

I know with absolute certainty that Nefertiti would not have enjoyed the success it did without the blogosphere. And this is in no way pandering to your question. It’s simply the truth. I think that debut authors who aren’t on the web are really missing out and potentially hurting their own careers. Of course, once in a while a debut book comes along which has such a huge marketing and publicity budget behind it that it does phenomenally well even without the blogosphere. But those books are becoming increasingly rare. Authors are expected to do a great deal of their own marketing and publicity. The most effective way of doing both, in my opinion, is to approach bloggers. I know that most of my book purchases come from books which I’ve seen bloggers review highly. If that’s the case for me, how many other people is it the case for?

5. Who or what have been the biggest influences in your life in regards to your writing?

Sometime during my fourth year in college, I decided I wanted to pursue a Ph.D in English, and I began my applications to places like Duke and Stanford and Harvard, knowing that if I wanted to teach at a good university I would have to earn my Ph.D somewhere equally prestigious. Everyone thought this was a wonderful idea. After all, what else was an English major going to do with her life? But when I went to get a recommendation from a young (and brilliant) professor who had just started teaching at our college, he gave me a puzzled look and asked, “Why would you do this? Don’t you want to write?” I told him I did, and the best advice anyone has ever given me about writing was when he replied, “If you want to write your own work, then do it. If you want to spend your life writing about someone else’s, then get a Ph.D and become a professor.”

I am so thankful that this professor, Paul Saint-Amour (lovely name, isn’t it?), took the time to sit down and really open my eyes as to what I was about to get myself into. After that I went back to my dorm room to think over what he had said, then two weeks later I withdrew all of my Ph.D applications. It was the best thing I ever did.

6. Your blog, History Buff, is really great. Do you ever use any of these articles or pieces of them as inspiration for novels?

Actually, yes! Although most of my inspiration comes from traveling to archeological sites, once in a while I will come across an article online and think, that has to go in the book! Usually it will be a article about a brand new discovery which sheds a new light on a particular character or place.

7. On the personal side, do you have any favorite authors-are you currently reading anything? Also, what do you do with any downtime you manage to get?

I have to say, I really don’t have any favorite authors. There are so many fabulous writers out there that it would be difficult for me to pick just one or two! But I can tell you that I’ve read and reread Janet Fitch’s White Oleander until the pages came undone. And I am a huge fan of Richard Preston’s. When I’m not reading, I’m traveling. I travel at least four months out of the year, usually to France, but often anywhere that takes my fancy. My last trip was with the Archaeological Institute of America, and it was a cruise that retraced the journey of Odysseus from Homer’s The Odyssey.

8. Finally, you’re currently in the middle of getting your third novel, Cleopatra’s Daughter, ready for publication. Can you tell us a little bit about it and when it’ll be published?

My third novel will be Cleopatra’s Daughter, which will be released September 15, 2009. The book will follow the incredible life of Cleopatra’s surviving children with Marc Antony — twins, named Alexander Helios and Cleopatra Selene, and a younger son named Ptolemy. All three were taken to Rome and paraded through the streets, then sent off to be raised by Octavia (the wife whom Marc Antony left for Cleopatra). Raised in one of the most fascinating courts of all time, Cleopatra’s children would have met Ovid, Seneca, Vitruvius (who inspired the Vitruvian man), Agrippa (who built the Pantheon), Herod, his sister Salome, the poets Virgil, Horace, Maecenas and so many others.

Here for your enjoyment is a trailer for the new novel Cleopatra’s Daughter. The book cover however is only a stand-in until the real one is finished. Enjoy.

Michelle, thanks so much for joining us here today and taking the time to chat. You can visit Michelle’s website here and her blog here. Great interview and I really look forward to your next novel coming out!