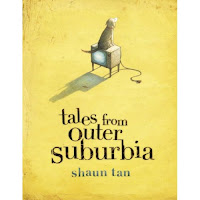 Tales from Outer Suburbia by Shaun Tan is not a book I would ordinarily pick up to read which is exactly why I did. It’s a graphic style novel with 15 short stories in it geared to ages 12 and up, but would be enjoyable to adults also.
I would have to describe this as a very strange and bizarre book I think. It’s almost like walking through a dream filled night when the pictures are changing on you quickly. It is very outside the box and would appeal to teens with really great imaginations as most of the stories leave you with pieces to figure out on your own. It is through these odd stories that the author is trying to make us aware of the things we may not normally notice day to day. I really think you need to read through it a few times to really be able to absorb the meaning behind these short stories. I wonder if even some young adults might be left wondering at what they’ve just read. There are a few stories that left me shaking my head and I’m an adult although I’ll admit to not having a wild imagination so that may be the problem.
I did have a few favorite stories though. One being Eric, the foreign exchange student who may actually be an alien who comes to stay with a family in a different world from his own. The point to this story being that Eric was different and the family had to learn to deal with his differences and accept them. Another was about these homes that all had their own inner courtyards where things were beautiful. If it was winter in your real world, it would be warm and summery in this one. What I wanted most of all was one of these inner courtyards for myself. The last story I really liked was of these dogs who hold a wake for one of their own by watching the owner’s house burn down.
The beauty of this graphic novel comes down to the artwork by Shaun Tan. It is amazing and for that alone I am glad to have this book. I was absolutely taken in by the photos and the way they weave in with the story is great. There are many pictures in the book in which you just lose yourself in them while exploring all they have to offer. My favorite picture is in the story of Eric where he leaves them a little thank you for all they did for him. The picture is set on a black background with tiny little things that Eric found and little flowers sticking out of them. The contrast of the black with the colors is mesmerizing.
So, while I wouldn’t say this is my favorite book mainly because I’m not really into short stories I will say that for the most part I did enjoy this. I think other than the few stories I mentioned I was much more taken by the artwork than the stories themselves. I will very likely go back to this novel more than once for the artwork alone.
This book was released by McClelland & Stewart on October 28, 2008. You can learn more about it and purchase it here. You can also visit Shaun Tan’s website here.
Share this post!