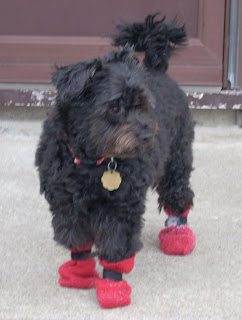 Here’s the first pic of the season of Buddy in his winter booties and as you can see he is ignoring me because he’s mad that he is wearing booties. LOL. First he tried kicking them off in the yard then he resorted to trying to chew them off before he got in trouble from his mommy. It’s pretty cold here and his little paw-paws are starting to get cold. He holds them up in the air and limps around the yard so that means it’s time for the dreaded booties. I’ll probably post more through the winter if I can get some cuter ones. Isn’t he adorable!
Views: 3
Share this post!