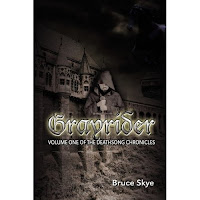 Grayrider by Bruce Skye is the first in the Deathsong Chronicles and was really an enjoyable read for me. It’s mythical fantasy with magic and medieval fighting, kings and sorceresses—totally my idea of a good story to completely sweep me up in another world.
We are taken to the land of Boadhagh and there we first meet Gabriel who is actually Grayrider, an exiled king. He’s come to warn King Airell of impending danger from the Ansgarian army. This is the same army that murdered his family and he is full of rage and revenge towards them and their ruler, the evil sorceress Morrigan. King Airell hasn’t enough men to fight though and this is where Grayrider comes in to the picture with his fire snorting horse, Windfire and his green glowing sword, Deathsong.
At this point also we are introduced to Princess Deirdre, King Airell’s daughter. She had left home because she didn’t want to be Queen after her father’s death. Instead she wanted to explore her magical abilities. She was eventually approached by the evil sorceress Morrigan and became and apprentice to her not knowing who this woman really was or how evil. When Deirdre discovers that this powerful sorceress is actually Morrigan she knows she must leave and reach her father to warn him of the attack.
Gabriel and Deirdre join forces to defeat Morrigan. They head up to the Pass to join up with Kalen, leader of Airell’s army. From here the story really takes off and becomes a fast paced trip through the planning of the battles and the actual fighting. Along the way Deirdre is casting spells left and right to affect the weather or to protect soldiers. She saves Gabriel’s life more than once by placing a protective shield around him. All the while, she is gaining confidence in her magical abilities. The story culminates in an plot twisting finale that I wasn’t expecting but thoroughly enjoyed.
What I really liked was the classy and effortless romance that Bruce Skye weaved throughout this novel between Gabriel and Deirdre. It’s so well done that it was a pleasure to read it and more than once it brought a smile to my lips. One such piece that made me smile was this little romantic scene…

Gabriel is such an honest and endearing man that you can just picture him in the scene above feeling hesitant. He is one of those men in a book that you cheer for because he is honorable and respectful and sweet on top of it all. I was rooting for him and Deirdre all the way. The author completely draws you into this story and this romance. I excitedly turned each page quickly in an effort to find out what was going to happen next and wasn’t disappointed.

I will be anxiously watching for the next installment in the Deathsong Chronicles which will be called Hard-Favour’d Rage and then the third being, A Dragon’s Wrath with a fourth in the works also called Fortune’s Fool. I can’t wait to swept back into this fantastical world.

Many thanks to Bruce Skye for this wonderful fantasy story and to Dorothy Thompson at Pump Up Your Book Promotion for sending me this great book. You can visit Bruce Skye’s website here. Please join me tomorrow when Bruce will stop by with a guest post here at Peeking Between the Pages.