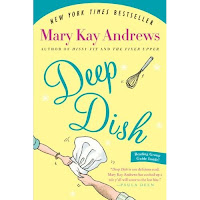 Deep Dish by Mary Kay Andrews is a book I read for Book Club Girls Blog Talk Radio show which took place on March 25. I found it to be a really fun, light book and I enjoyed it quite a bit. A big part of the reason probably being that I love cooking shows and the Cooking Channel, not to mention some good old chick lit in the Southern style never hurts either.
The story centers around Gina Foxton who has her own cooking show on a local channel called Fresh Start with Regina Foxton. Her show focuses on making healthy food using the freshest of ingredients. Gina is a really likeable character and I laughed at her antics throughout the book several times. Her sister Lisa is hilarious and although not a main character of the book, she turned out to be one of my favorites. Gina is the good sister and Lisa the bad and the two of the together turn out to be a quite funny pair. Gina telling her sister how she has to shape up or how she can’t leave the house looking like a tramp made me laugh more than once. Turns out in the end though that Lisa isn’t quite as wild and crazy as she likes to make out. Their mother Birdelle deserves mention too, because again, she doesn’t play a big role but the role she plays gives you a giggle or two.
The other main character is Tate Moody and his dog Moonpie. Tate has his own show on a southern cooking channel called Vittles. As Tate is definitely a man’s man, his show is an outdoor hunting and fishing type show~living off the land kind of thing. I liked Tate too; he’s a laid back kind of guy, not into the celebrity type life. His dog Moonpie though, steals the show. Now granted I’m a dog lover but still, I just adored Moonpie and I really felt he played a big role in bringing Gina and Tate together. In a few parts where she describes him just not listening and engaging in doggie antics, I cracked up laughing. Any pet lover can relate.
So, Gina is in fear of losing her job because her ex-boyfriend Scott decided to sleep with the producer’s wife. Obviously, without question, he’s a jerk. So, an offer is made of a highly publicized competition between Gina and Tate out on Eutaw Island~a place out in the middle of nowhere really. It will take place over 3 days with Gina and Tate having to cook with ingredients from the land. Whoever wins the best out of 3 will be the winner of the competition and get a big cooking show on the Cooking Channel. For Gina, this is huge. Without it, she’ll lose her home and who knows what else, not to mention her mother will be mortified. The unfolding of the story during the competition is funny and good and it also brings about more of the romancey aspect between Gina and Tate.
I really enjoyed reading about the behind the scenes of a cooking channel show. It’s fun to read about how things really are behind the cameras. I enjoyed the little romance of the novel and I was rooting for Gina and Tate all the way. I would definitely read another of her novels when I’m looking for a light and fun read~something that takes me away from real life for a while. Ultimately, while I do think this is a chick lit novel, it also shows women in a good light. Gina is a strong woman who knows what she wants for her life and future and goes about getting it full tilt.
You can check out Mary Kay Andrews website here and you can listen in to the Blog Talk Radio show here if you’d like. It was really fun and Mary Kay Andrews was great to listen to. If you’d like to purchase her novel Dish Dish, you can do it here in the US and here in Canada.
Share this post!