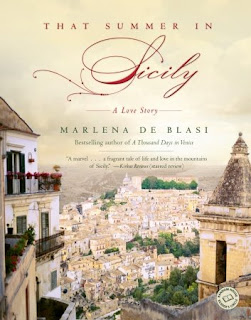 Cover Attraction is brought to us by Marcia at The Printed Page. This is what she has to say…’I’m a very visual person and love beautiful, or interesting, cover art. It entices, and invites, me to stop and take a peek instead of walking right on by.’
I happen to agree. This weeks cover attraction for me is:
That Summer in Sicily: A Love Story by Marlena de Blasi
Release Date: May 19, 2009 by Random House Canada (Trade Paperback)
From Random House Canada:
‘“At villa Donnafugata, long ago is never very far away,” writes bestselling author Marlena de Blasi of the magnificent if somewhat ruined castle in the mountains of Sicily that she stumbles upon one summer while traveling with her husband. There de Blasi is befriended by Tosca, the patroness of the villa, who shares her own unforgettable love story. In a luminous and tantalizing voice, de Blasi re-creates Tosca’s life and romance with the last prince of Sicily descended from the French nobles of Anjou. But when Prince Leo attempts to better the lives of his peasants, his defiance of the local Mafia costs him dearly. The present-day narrative finds Tosca sharing her considerable inherited wealth with a harmonious society composed of many of the women–now widowed–who once worked the prince’s land alongside their husbands. This marvelous epic drama reminds us that in order to live a rich life, one must embrace both life’s sorrow and its beauty.’
I fell in love with this cover first and foremost. It’s the paperback edition and it is absolutely gorgeous. It reminds me of how much I’d love to visit Italy someday. What I wouldn’t give to be sitting on a balcony there overlooking the scene depicted on this cover. I have no other words other than I think it’s a very beautiful cover and the story sounds good to me too.
Views: 0
Share this post!