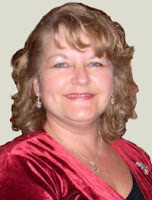 I’m really excited to welcome Donna Lea Simpson, author of Lady Anne and the Howl in the Dark to Peeking Between the Pages today to share with us a wonderful guest post. I really enjoyed this novel as I usually do when there is a spunky female heroine involved~take a peek at my review here. So, without further delay here is the guest post from Donna and remember to stay tuned because at the end of the post as there will be a giveaway…
I’m so happy to introduce people to my new series from Sourcebooks Casablanca, the Lady Anne series, kicking off with Lady Anne and the Howl in the Dark, out April 1st.
The idea began with a skeptic’s eye toward the proliferation of werewolf, vampire and ghost books that have in the past few years taken the romance world by storm. Heck, I’ve even written a few myself. In fact, I came to this series – Lady Anne – in an interesting way… having just come from writing a paranormal series, (Awaiting the Moon, etc.) where my heroine found out there really are werewolves, I flipped the idea to having a skeptical woman set out to disprove the existence of the supernatural forces apparently at work.
And truthfully, having written paranormal werewolf novels I knew very well that if I heard about a werewolf attacking folks, being skeptical by nature, I’d say, “Okay, someone is out there wandering around in a dog suit!” Think about it logically; with all the weird creatures proliferating in romance fiction today, the world’s getting a little crowded.
However, I do understand the affection for the paranormal right now. It adds a little zip to life, thinking that ghosts, ghouls and werewolves could exist, doesn’t it? Historical romance offers a similar ‘getaway’ feel, the ability to escape into something out of the everyday. Maybe that’s why paranormal works so well in a historical context. You’re adding a couple of layers of the unusual to what could be an everyday romance.
So I do hope readers enjoy my use of the paranormal in the Lady Anne novels. I’m having such a good time with it, because beneath it all, I think secretly I’m hoping my skepticism will be unfounded some day. A werewolf running loose: bring it on! A brooding fellow who turns into a bat and flits up to the belfry? Great!
But in essence, what is more important than even the paranormal thread running through the series, is how much fun I had creating the heroine and hero! Lady Anne, as a character, developed naturally as an intelligent but plain woman who has been courted too many times for her dowry. When a man professes love, she’s likely to wonder what he wants. And then with Lord Darkefell we have a hero who is weary of featherbrains, flatterers and sycophants. He’s intrigued by Anne’s intelligence, and even more by her deeply passionate nature; romance naturally follows, she resisting, and he, insisting! They are the perfect match, even if they don’t realize it at first!
__________
Here’s a little about the book:
Lady Anne and the Howl in the Dark

England, 1786
Lady Anne, a smart, stubborn, and skeptical spinster, travels north to Yorkshire at the request of a newly married friend to try to figure out what is going on. A wolf—or werewolf—is roaming the countryside near Darkefell Castle, terrorizing the populace and harassing the sheep herds. The hour she arrives in Yorkshire she stumbles across a body, and her outraged sensibility demands she discover who committed such a foul deed.

With a bewildering love/hate relationship developing between her and the master of Darkefell Castle, the Marquess of Darkefell—he happens to also be her friend’s new brother-in-law—Anne investigates, digging into the family history. Confused by the marquess’s passionate pursuit of her and skeptical of the claims of a werewolf on the loose, Lady Anne manages to triumph, uncovering the reality of a very human murderer, a bitter enemy of the family, just in time to keep from becoming his next victim.

Alarmed by her growing passion for the imperious Marquess of Darkefell, Anne flees after successfully unmasking the killer. But Darkefell, as stubborn as Anne and twice as imposing, follows her. Their courtship, unconventional but fiery, will continue in Lady Anne and the Ghost’s Revenge (Sourcebooks Casablanca – August 2009) and Lady Anne and the Gypsy Curse (Sourcebooks Casablanca – November 2009), as he attempts to bully… or rather persuade her to marry him, and she tries desperately to concentrate on debunking ghosts, and discrediting gypsy curses.

I had a great time with these characters; they often do quite unexpected things! And I hope readers enjoy them as much as I did writing about their adventures.

Visit me at http://www.donnaleasimpson.com/ for more information on the Lady Anne series!

__________
GIVEAWAY
Danielle at Sourcebooks has been kind enough to offer up to one of my readers their very own copy of Lady Anne and the Howl in the Dark by Donna Lea Simpson. The rules are as follows:

The giveaway is open to US and Canadian residents only (no PO boxes). I will draw for a winner on Monday, April 13. Good luck everyone!