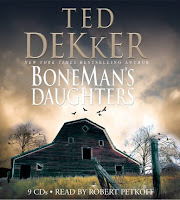 I’m really excited today to offer up 3 copies of the audio book of Boneman’s Daughters by Ted Dekker courtesy of Anna at Hachette. I haven’t had the opportunity to listen to it yet but as soon as I do I will post a review. I think this novel will be fabulous on audio. For the time being though, you can take a look back at my review of the book here.
Here’s some info on the book from Hachette…

So, what do I need from you. Well here are the rules…

The giveaway is open to US and Canadian residents only (no PO boxes). The publisher will be shipping the audio books directly to the winners. I will draw for a winner on Saturday, May 23, 2009.

Good luck to all and don’t forget to check out my other giveaways posted all along my sidebars!