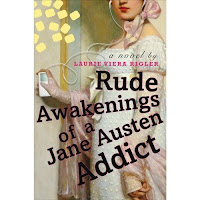 A little background is in order I think. In Confessions, Courtney ends up in Jane’s world in the 1800’s and struggles to find her way there and it was a series of hilarious happenings that kept me laughing. In Rude Awakenings, Jane Mansfield ends up in Courtney’s world which is our world now and Jane is none to happy with how things seem to have changed. She doesn’t seem to have a servant, men are coming into her room, and oh my—the clothes—they don’t cover your whole body. One of the most hilarious scenes for me was when Jane/Courtney is putting on underwear…

Jane had wanted to escape the rigidness of her own life and well she certainly succeeded when she ended up waking up in this one. The story takes us through Jane trying to accustom herself to our world. Think about it, she’s never seen tv, dvd’s, cars—any number of what we consider modern conveniences. When she finds Pride & Prejudice playing in the glass window she is fascinated. I think though she’s most surprised at the apparent lack of morals people have in this day compared to her time and she feels very conflicted over that.

The real Courtney’s friends Anna and Paula think she’s off her rocker. That hit on the head in the pool really mixed up her marbles. Then there’s Courtney’s ex Frank and the whole scandal there involving Wes. With Wes, she just doesn’t know what to think. She still can’t come to terms with having a man in her apartment unchaperoned but she sure does like having him around but apparently he lied to Courtney so that’s just one messed up situation too.

As time passes, Jane/Courtney becomes more used to life in this new world and she’s liking it. For the first time in her life she has independence, her own place and privacy —something she’s always craved and she learns that she can get a job, make money and take care of herself. This novel is a delightful look at our world through the eyes of a nineteen century Jane Austen addict.

While this story is witty and funny and very entertaining, Laurie’s wonderful writing style shines through. I always seem to find myself falling into her books and losing myself for a while and for me that’s the purpose of a good book. I have another favorite quote from the book to leave you with…

A huge thank you goes out to Laurie for sending me her newest novel Rude Awakenings of a Jane Austen Addict. I hope this isn’t the end of the line for either Jane or Courtney but whatever Laurie chooses to write about next, I’m sure it’ll be just as awesome as this novel is! Make sure and pop over to Laurie’s website here, she’s got a really great site. Rude Awakenings of a Jane Austen Addict releases tomorrow, June 25, so be sure to check it out! You can purchase the book here in the US and here in Canada. Oh, and keep an eye out about mid-July, there just may be a surprise coming up.