The Painter From Shanghai by Jennifer Cody Epstein is such a great book, rich in historical detail, Chinese customs and Chinese art. I really enjoyed learning about the turbulence in China in the beginning of the 20th century as it wasn’t anything I knew about previously.

I appreciate all the hard work that must have gone into the historical detail of this fictional account of Pan Yuliang, one of the very talented Chinese artists who influenced the Post-Impressionist art movement and more importantly was a woman. In Pan Yuliang’s time it was unusual for women to be recognized for much of anything let alone art. She was a most amazing woman for her time, very strong in character and determined to do what she wanted to do for herself in regards to her love of art.

Pan Yuliang began life as Xiuqing living with her uncle after her mother had died. Unfortunately her uncle had a bad opium habit and sells her to a brothel at the age of 14 to pay off some of his debts. I was just horrified at this and my heart broke for her to be thrown into that kind of life at such a young age. Thankfully she made friends with another girl, Jinling, and I think this is what saw her through a lot of the harder times.

Finally she is rescued from the brothel by Zanhua, a man who had much more lenient beliefs when it came to Chinese women and a man who also appreciated a good mind in a woman. He saves Yuliang’s life, he loves her and in order to stop scandal, he makes her his concubine. He also introduces her to a higher education as he wants her to learn and along the way she becomes fascinated with art. As her art career evolves and she becomes noticed Zanhua is torn between wanting her to succeed and be happy to wanting a traditional home life.

I really liked Yuliang. I think the way she is brought to life in the novel really draws you into the torment she felt at the hands of evil men in the brothel or the excitement and drive she felt when it came to her art. I liked her strength. So many others would have given up but she knew that someday things would change for her and later when she was being harrassed she still held the belief that things might change. Zanhua was another favorite character because of the way he always supported Yuliang, how he wasn’t afraid to stand up to others for her. At times Yuliang would later think of how much he gave up for her and it leads her to make certain decisions pertaining to their future.

On Jennifer Cody Epstein’s website you can see some of the paintings of Pan Yuliang. I find the self-portraits wonderful. This one is my favorite…

One of the others I really like is of these flowers. I love flowers and have always loved paintings of them. This is so beautiful, the colors so vivid and realistic, that I feel I can almost smell them… 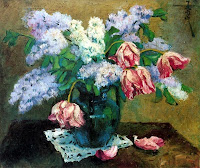 This novel is one that you will want to spend some time with. The writing is beautiful and rich, the characters complex and the descriptions of China, Shanghai and Paris amazing-you almost feel as though you are there on the streets. It will draw you in and have you engrossed until the end. It’s an amazing historical saga of the fictional life of one woman, Pan Yuliang, and one well worth reading. If you read and enjoyed Memoirs of a Geisha I think you would like this one. I kept thinking to myself as I read that it reminded me in some ways of that novel which I also loved.

Many thanks to Lisa with TLC Book Tours for having me participate in the tour. You can see other tour stops for The Painter From Shanghai here.