Good morning everyone! I hope everyone is having a happy Sunday so far. It’s still early here, just coming on 9 am. We had a really bad storm last night – thunder, lightning and hail. Wowser! It was a goodie! It even tore down some parts of buildings in our downtown area. Anyway, sadly for me I didn’t get to see much of it because Buddy likes to be downstairs during a storm and he likes to have mommy with him. So he had himself a nice nap while mommy read her book.

Let’s see what else is up today. Oh, I have to take back some clippers I bought to cut Buddy’s hair and get another pair instead. I bought him a new collar and harness yesterday-he’s quite impressed with himself and his new collar but he’s not wearing it till his haircut and bath. Which takes us to why I don’t have a pic of him today in his new collar because – ok, here’s the story- I was going to cut his hair on Friday night but the clippers quit so his back is done but his sides and legs and face aren’t. He looks hilarious. Then the clippers I bought yesterday I figured I could use my old attachments on – nope. They try to weasle money out of you any way they can. So he hasn’t had his haircut yet and he looks odd. lol.

On the reading front, today I’m working on Twenties Girl by Sophie Kinsella and it’s really good. The other book I’m starting for a book tour is The Book of Unholy Mischief. Tomorrow I’ll have up a review of The Sinful Life of Lucy Burns and on Tuesday I’ll have Holly’s Inbox up. I’m still having the giggles over that one. I’ve really been in a reading mode which is good for me and good for my reviewing. I’m happy that I’m feeling like that again as I was in a bit of a slump for a while.

Well here’s this weekend’s pic of Buddy. This is last night during the storm. Do your dogs lay like this? I think it’s the absolute cutest when he lays like this with his paws in the air! I just want to snuggle my face in his belly which he’s ok with as long as you don’t make that noise that you do with babies cause that’ll get you your nose nipped. lol. 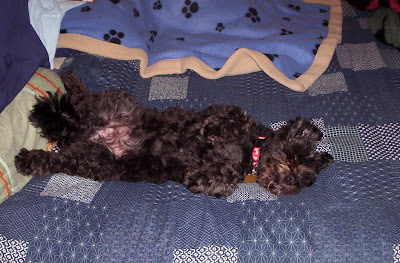 So, what’s everyone up to today? Any exciting plans? Reading anything good? I’m just about to have myself another coffee and then get started on my day. Have a great day everyone!