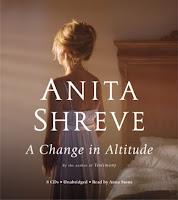 Last but certainly not least and also courtesy of Anna at Hachette Book Group I have 3 audio book copies of A Change in Altitude by Anita Shreve up for grabs. Now I just finished reading the paper copy of this book and while it isn’t her favorite of mine I still enjoyed it.

Here’s a bit about the book from Hachette…

Margaret and Patrick have been married just a few months when they set off on what they hope will be a great adventure-a year living in Kenya. Margaret quickly realizes there is a great deal she doesn’t know about the complex mores of her new home, and about her own husband.

A British couple invites the newlyweds to join on a climbing expedition to Mount Kenya, and they eagerly agree. But during their harrowing ascent, a horrific accident occurs. In the aftermath of the tragedy, Margaret struggles to understand what happened on the mountain and how these events have transformed her and her marriage, perhaps forever.

A Change in Altitude illuminates the inner landscape of a couple, the irrevocable impact of tragedy, and the elusive nature of forgiveness. With stunning language and striking emotional intensity, Anita Shreve transports us to the exotic panoramas of Africa and into the core of our most intimate relationships.

A bit about the Author

Anita Shreve is the acclaimed author of fourteen previous novels, including Testimony; The Pilot’s Wife, which was a selection of Oprah’s Book Club; and The Weight of Water, which was a finalist for England’s Orange prize. She lives in Massachusetts.

I have 3 audio book copies of A Change In Altitude by Anita Shreve up for grabs. What can you do to enter…

This giveaway is open to US & Canadian residents only (no PO boxes). The audio books will be shipped to the winners directly from the publisher. I will draw for the winners on Sunday, November 15, 2009. Good luck everybody!