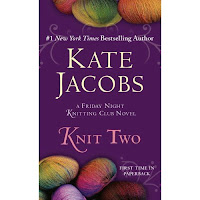 I have got a fabulous giveaway for you today courtesy of Putnam Books. I’ve got an ARC of Kate Jacob’s new novel Knit the Season-absolutely perfect for Christmas! In addition I’ve got a paperback copy soon to be released of her second novel in the series Knit Two. Isn’t that fantastic!

Now anyone who reads my blog knows how crazy I am about this series. It’s warm, inviting and pulls you in with all the knitting and food talk. One of my favorite things is also the close friendships between the women in this book. It all just warms my heart. It all started with The Friday Night Knitting Club and has been a great series throughout. Knit the Season is centered around the Christmas season and what it means to have the love of family and friends.

I have read Knit the Season and loved it! My review will be up later in the month along with a lovely interview with Kate Jacobs. However I really wanted to make sure that the winner knew that they had won before Knit the Season and Knit Two release on November 3, 2009.

Here’s a bit about Knit the Season by Kate Jacobs from Amazon.com:

Knit the Season is a loving, moving, laugh-out-loud celebration of special times with friends and family. The story begins a year after the end of Knit Two, with Dakota Walker’s trip to spend the Christmas holidays with her Gran in Scotland-accompanied by her father, her grandparents, and her mother’s best friend, Catherine. Together, they share a trove of happy memories about Christmases past with Dakota’s mom, Georgia Walker-from Georgia’s childhood to her blissful time as a doting new mom. From Thanksgiving through Hanuk­kah and Christmas to New Year’s, Knit the Season is a novel about the richness of family bonds and the joys of friendship.

And a bit about Knit Two by Kate Jacobs from Amazon.com:

At the Manhattan knitting store founded by Georgia Walker, the members of the Friday Night Knitting Club-including Georgia’s daughter Dakota, now a college freshman-continue to rely on each other for help, even as they struggle with new challenges: for Catherine, finding love after divorce; for Darwin, the hope for a family; for Lucie, being both a single mom and a caregiver for her elderly mother; and for seventy something Anita, a proposal of marriage from her sweetheart, Marty, that provokes the objections of her grown children. As the club’s projects-an afghan, baby booties, a wedding coat-are pieced together, so is their understanding of the patterns underlying the stresses and joys of being a mother, wife, daughter, and friend. Because it isn’t the difficulty of the garment that makes you a great knitter: it’s the care and attention you bring to the craft-as well as how you adapt to surprises.

Kate Jacobs is the New York Times-bestselling author of Comfort Food, Knit Two, and The Friday Night Knitting Club, which has over 1 million copies in print.

Kate grew up near Vancouver, British Columbia, in the scenic and delightfully named town of Hope (pop. 6,184). It’s an area filled with friends and family and Kate loves to visit. Back then, of course, it was tremendously boring, as only home can be to a teenager. As a result, Kate begged her parents to send her to boarding school in Victoria, BC. From there she traded in her navy blazer to earn a Bachelor’s degree in journalism at Carleton University in Ottawa. Next, in a fit of optimism/courage/naivete – take your pick – she followed it up with a move to bustling New York City (pop. 8,143,197).

The plan? Breaking into magazine publishing. First she received a Master’s degree at NYU and worked at a handful of unpaid internships, then got a spot as an assistant to the Books & Fiction Editor at Redbook magazine. It was here that Kate answered multiple phones, read a ton of slush (getting to know some wonderful writers- to-be), and began to experience the impact of sharing women’s stories. Around this time, Kate settled into an apartment complex that housed about as many people as her entire hometown in Canada: It seemed that she wasn’t just a small-town girl anymore.

Professionally, Kate made it a priority to explore content that resonated with women: She was an editor at Working Woman and Family Life and was later a freelance writer and editor at the website for Lifetime Television. Personally, as a newcomer to New York, she learned the power of building a surrogate family and stitching together friendship connections that will endure. Exploring the richness of women’s relationships is a key focus of her novels.

After a decade of Manhattan living, Kate moved to sunny Southern California with her husband. (And discovered that she likes suburban living just fine, thank you very much.)

She relished the idea of her very own home office but found herself setting up the laptop on the dining table, just as she’d done in New York, and writing late at night in her pajamas.

A firm believer in the creative power of free time, Kate loves to recharge by tackling knitting projects that she can finish quickly (all the better to feel that sense of accomplishment). She’s also a fan of taking naps, especially when she’s on deadline, snuggling under a favorite green-and-yellow afghan knitted by her grandmother decades ago. Her beloved liver-and-white English Springer Spaniel, Baxter, often snoozes alongside.

This giveaway is open to US & Canadian residents only (no PO boxes) and I’ll be drawing for the winners on Saturday, October 31, 2009. Good luck everyone!

I’ve mentioned this before I think but check out Kate Jacob’s Fan Club page on Facebook.