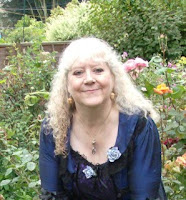 Welcome everyone. I’m pleased to have Helen Hollick, author of Pendragon’s Banner here at Peeking Between the Pages today. I reviewed Pendragon’s Banner, the second book in The Pendragon Trilogy yesterday and you can see my review here. It was fantastic! Well I enjoy having Helen guest post here and this time around I asked her about the history behind the trilogy and this is what she had to say…

I “discovered” Arthur after reading Mary Stewart’s Hollow Hills and Crystal Cave, both of which I enjoyed. Even though there was a fantasy element, Merlin’s “magic” seemed plausible, and the characters came alive. What intrigued me, the books were set in a more realistic time period – the post Roman era. Ms Stewart’s author’s note added to my interest as she explained that Arthur – if he had actually existed – was more likely to have lived in these Dark Ages of circa 420 – 520 AD.

This intrigued me and straight after I re-discovered the wonderful Roman books of Rosemary Sutcliff (Eagle of the Ninth, Mark of the Horse Lord, Frontier Wolf etc) As I was working as a library assistant at the time I had almost unlimited access to books, so I started researching the “matter of Arthur” and found myself decidedly hooked.

I had been writing for years, mostly fantasy and science fiction, but I began a new project of attempting to write Guinevere’s story. This became a dismal failure as my scribblings were utter rubbish. (Thank goodness I have no copies of them ) I could never get beyond chapter three.

Then I read Marion Zimmer Bradley’s Mists of Avalon. A good book, but I did not like her portrayal of Guinevere. At one point I threw it across the room shouting “Oh pull yourself together you silly woman ” I mean, she was the Queen, yet she was behaving like a spoilt child.

By this time several years had passed. I was now married with a baby daughter . When she started nursery school and I knew I would have several hours to myself each day I decided to have another go at “my novel”. I would write the Arthurian story that I wanted to read. No myth or magic. No Holy Grail, round table, Merlin or Lancelot. Just the story of what might have really happened. And Gwenhwyfar – as I was to call her – would be a feisty woman who was capable of defending herself and giving Arthur a piece of her mind when necessary.
But still the story would not come.

Then I realised why. My heart (and imagination) was not focussed on Gwen, but on Arthur. I needed to write his story, make him the main, lead character. And once I realised this I was off, writing as if there was no tomorrow.

Incidentally, I also found A Hollow Crown difficult to write, partly because I had lost a very dear friend who died suddenly just as I was about to start writing it, but also because Crown is the Saxon Queen Emma’s story. It seems I prefer male characters as the lead inspiration
I researched, I wrote. Every spare moment I was scribbling away. “When I write my bestseller” I would say to friends and family. I got used to the tut of a response and the rolling eyes.

I then hit a brick wall. I suppose I lost heart and confidence. Why was I bothering? Who was going to read my rubbish, let alone publish it? I stopped writing. Writers block – big time. For six months I did not write a word – could not write a word. Then I gave it one more go and joined a writers’ group.

Within the first ten minutes I realised I was in the wrong place. A lovely group of ladies, but they all had problems to solve and wanted to do so via expressive writing. I was not going through a divorce, broken relationship, deep depression or the menopause.

We were given an A4 sheet of lined paper and the exercise of writing our feelings down. “Express yourselves” the tutor said. “Write what you feel.”

I sat there. Not a word in my head. I had to write something. Anything. So I wrote the first word I thought of. Then the second, the third….

Then I wrote “sword” followed by “battle”. Before I knew it I was writing a battle scene… this battle scene:

“With an exhausted grunt of effort Arthur, the Pendragon, raised his sword and with a sharp intake of breath brought it down through the full weight and momentum into the skull of an Anglian thegn. Another battle. Arthur was four and twenty years of age, had been proclaimed Supreme King over Greater and Lesser Britain three years past by the army of the British – and had been fighting to keep the royal torque secure around his neck ever since.”

Which became the opening paragraph of Pendragon’s Banner, book two of my Trilogy

~~~Helen, as usual it is such a pleasure having you here at Peeking Between the Pages. Thanks so much for sharing this fantastic guest post with all of us! I’m on the edge of my seat already waiting for the last book in the trilogy, The Shadow of the King.

Courtesy of Paul at Sourcebooks I have one copy of Pendragon’s Banner to share with one lucky reader. What can you do to enter…

This giveaway will be open to US & Canadian residents only (no PO boxes) and I will draw for the winner on Saturday, November 21, 2009. Good luck everyone!