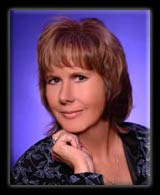 Hello everyone, I’d like you to all join me today in welcoming Kylie Brant to Peeking Between the Pages with a guest post and a giveaway! Kylie has a dark romantic thrillers trilogy – Waking Nightmare, Waking Evil & Waking the Dead being released September-October-November by Berkley. I haven’t read them – you all know my seriously overloaded tbr pile but there sure isn’t any reason why I can’t hold a giveaway so one of you can enjoy them! So, sit back, relax, and enjoy Kylie’s guest post on The Mindhunters…

I’m often asked where I get my ideas. My eyes tend to glaze over at the question, because the truth is, I don’t know. They’re just always sort of there, appearing as wispy snippets in my mind, forming and reforming until they solidify into something I can actually work with. I suspect they come from everything and everywhere; the news, TV shows, experiences in my life or in the lives of others. By the time they form something approaching a plot they bear little resemblance to the original thought.

The idea for The Mindhunters was much like that. I’ve always loved police shows and my favorite show is NCIS. My taste in movies runs to action/adventure and psychological thrillers. I’m on a lot of loops with ex-law enforcement and one thing I hear over and over is that no crime is unsolvable, if the department has the time and resources necessary to pursue it. A regular poster on another blog is a private forensics consultant who is hired by law enforcement to assist on serial crimes. So the idea began to form: what about an agency that had those resources, manpower and time? And what if it were led by a legendary ex-FBI criminal profiler who hired some of the best criminologists in the country? And Raiker Forensics, The Mindhunters, was born.

ghtmare, Waking Evil and Waking the Dead are the first three novels in the series and are being released back to back in September-October-November this fall. They all feature an investigator from Raiker’s Agency. In Waking Nightmare forensic profiler Abbie Phillips pairs with Savannah police detective Ryne Robel trailing a vicious serial rapist. Abbie determines the selection method the villain is using—he learns his victims’ darkest fear and then fashions a torture to make them live it.

Waking Evil is the October release. All my books tend to be about evil to some extent, but it usually takes the form of very human villains, not the paranormal kind that feature witches, and creatures furry and fanged. But Waking Evil, my October release is not only another dark romantic thriller. This story also has a hint of the supernatural.

I’m not talking about ghosts and goblins and things that go bump in the night. Or maybe I am, LOL, since the characters in my book aren’t sure whether they’re dealing with the human sort of evil or something more otherworldly. Ramsey Clark has been hired by the Tennessee Bureau of Investigation to assist on a murder investigation in a small rural town. Despite what parapsychologist Devlin Stryker tries to tell her, she believes in facts and evidence, not legends about century old curses. But when another murder rocks the town, she begins to wonder if a killer is playing on everyone’s fears, or if a prophecy is indeed being fulfilled—one victim at a time.

Waking the Dead, out in November, was probably the most difficult one to write. I’m not sure what made me think writing about forensic anthropology and extracting DNA from bones. Turns out I don’t know much about either! The research was extremely labor intensive on this one, but fascinating. As my editor told me after she read it, “That’s more than I ever needed to know about defleshing bones,” LOL. The story has ex-forensic anthropologist Caitlin Fleming investigating the discovery of seven sets of human remains found in an Oregon cave. All bear the mark of their killer. All are minus the skulls. Wildnerness guide Zach Sharper helps her find her way in the Willamette Forest as she looks for clues. But the killer is closing in to terminate the search—and the investigator on his trail.

I had a good time researching this one, as I hiked through the Willamette Forest and crawled through caves looking for the perfect one to hide the bodies in. It took about four caves for my mind to make the association—caves : : bats. Bats????? Since the creatures tend to freak me out, after that I contented myself to merely look at the caves from the outside!

~~~~~~~
Thanks so much for that great guest post Kylie! I do look forward to reading your books one of these days soon – just as soon as I get myself out of the pile of books I’m buried under. They sure do sound awesome! Check out Kylie’s website as well – it’s great-she’s got some other books to check out along with this newest trilogy.

I have a set of 3 books – Waking Nightmare, Waking Evil and Waking the Dead – up for grabs for one lucky winner courtesy of Kylie Brant herself as she will be shipping your books to you. Thanks Kylie! What do you need to do to enter…

This giveaway is open to US & Canadian residents only (due to shipping costs) and I will draw for the lucky winner on Saturday, October 31, 2009. Good luck everyone!