Waiting On” Wednesday is a weekly event, hosted by Breaking the Spine, that spotlights upcoming releases that we’re eagerly anticipating.

My pick this week is a book called Darklight by Lesley Livingston. It is the sequel to a book I read quite a while ago called Wondrous Strange that I enjoyed a great deal and have been anxious to see what was next for the characters in this novel. It will be released by Harper Collins Canada on December 11, 2009. Here’s a bit about it from Harper Collins… 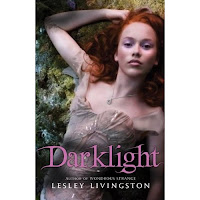 In this sequel to Wondrous Strange, Kelley Winslow finds her NYC acting career blossoming as she takes the lead in Romeo and Juliet. But she also finds herself desperately missing Sonny Flannery—who was forced back to the Faerie Otherworld, charged with a dangerous mission by Kelley’s father, King Auberon.

When Kelley finds herself thrown into the Otherworld following a deadly chase in Central Park, her passionate reunion with Sonny is cut short. Ancient magick is stirring, and a dangerous enemy has Sonny and Kelley caught in a web of Faerie deception that could tear their love apart.

In spite of himself, Sonny knelt back down on the grass and glanced into the Faerie queen’s improvised scrying pool. He had no wish to spy on Kelley. Still, he found he could not look away. . . . The wild, dangerous look on Kelley’s face made her look so much like her mother that it gave Sonny a hollow feeling in the pit of his stomach. But not nearly as much as the last, lingering image that flared up in the water—the image of Kelley throwing her arms around another man. —From Darklight

I’m really excited to see this novel coming out! So, what about you? What are you waiting for?