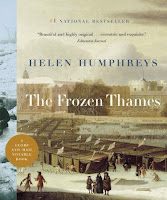 I’ve enjoyed other works of Helen Humphreys so when I saw The Frozen Thames which is a smaller book with a cover that intrigued me, I picked it up. It’s a collection of forty vignettes based on events that actually did take place each time the river froze between the years of 1142 and 1895 and how people’s lives were affected by it. After the London Bridge was rebuilt this didn’t happen anymore but the stories still remain to be told.

These vignettes capture small moments in time – they are only a couple of pages long but as with Humphrey’s writing, they are very vividly told. The stories range from the poor British people to the royalty like King Henry VIII. Some of the stories I found interesting and some made no sense to me.

The stories I really liked had known historical figures in them like King Henry VIII as he was being driven down the middle of the frozen Thames. There is talk of Anne Boleyn’s offenses and that she may be put to death. The people are waiting to see him cross…

Another story I liked was of Queen Matilda in the year 1142. Her castle is under siege and has been for more than three months. She no longer knows what to do when one night it begins to snow. She and her strongest men wait until the snow is at its thickest and they begin to cross the Thames. They are dressed in white and blend with the snow. They meet a sentry on horseback but they stand perfectly still. In turn, he blesses himself and rides on; he has taken them for ghosts.

One other story I really liked was about a little girl and robins. It is the cold of winter and dark and the little girl awakens to a little robin sitting on her bedpost. It has been a very cold winter and many animals are not surviving but many people in England have taken to bringing the birds into their homes so they can survive until spring. The little girl’s family is one that has done this and they have two robins. The little girl is waiting for eggs to be in the nest and baby birds being born. I just found this story magical.

The book is beautifully written which is something I’ve come to expect from Humphreys. The stories of the ice are told in such vivid detail that you can almost feel the cold seeping into your bones. There are many pictures throughout the book, many of them quite beautiful.

I read The Frozen Thames during the read-a-thon and while I can’t say it’s a favorite of mine there were definitely quite a few of the stories that I really appreciated. I think for those who enjoy short stories and can gather the meaning from them without needing a more detailed novel form will get a lot out of this book. For me, I still enjoy an actual novel – a story I can sink my teeth into. I had actually thought this was an historical novel about the freezing of the Thames when I bought it so I had a bit of a surprise when I opened it. Either way it was ok for me. The stories I liked, I really liked and the others were just ok.

My thanks…
To myself. This book belongs to yours truly and came from my ever leaning bookshelves.