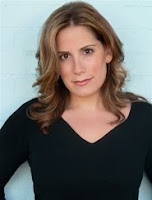 I am very pleased to welcome Julie Buxbaum to Peeking Between the Pages today. I reviewed her latest novel After You yesterday and it’s one of my favorite books this year – you can read my review here. I haven’t yet read her first novel The Opposite of Love but I have my very own copy and will be delving in soon. So, sit back with your cup of coffee, tea or hot chocolate and enjoy Julie’s thoughts today on Where her ideas come from…

The question I seem to get asked most often by readers is, on its face, a simple one: “Where do your ideas come from?” But I have to confess, I hate when this comes up because I never seem to have a decent answer. I wish there were an idea store I could visit each time I sat down to start a new project, or that finding a new book topic was as easy as a quick google. For me, the process–which I’m going through right now as I approach the incredibly daunting task of starting my third novel–is in many ways a subconscious one. I often don’t know where my ideas came from until long after a book is finished.

With AFTER YOU, my second novel, for example, I found myself suddenly captivated by the question of how well we really know the people we love. And once I wrapped my mind around this theme, and realized this was something I felt I could explore in a novel-length project, I started thinking about characters and plot. From there, Ellie Lerner, my main character was born. She gets the unique opportunity to step into the life of her best friend, and see behind that opaque curtain that separates all of us. When her best friend Lucy is murdered, Ellie drops everything–her husband, her career, her entire life in the Boston suburbs–to help take care of Lucy’s eight-year-old daughter Sophie. And in so doing, she gets to see her friend’s life from a whole new perspective, and perhaps learn a lot more about Lucy than she had ever bargained for.

Now that the book is out in stores, and I have some distance from its writing, I realize that a lot of the themes of AFTER YOU came from where I was in my own life when I sat down to start the project. I began thinking about the thematic underpinnings of the novel right around the time that my now-husband and I had gotten engaged. No wonder I was suddenly taken with the question of how well we know those closest to us! Suddenly–despite having known my partner for almost seven years at that point, and having had lived together for almost five–I began to spend hours obsessing about who was this person I had committed to marrying. What did he do during the long hours he went to the office? Where was he really, when I called at noon and his secretary said he was out to lunch? And what about all of the hundreds of details that make up a person? I could tell you his birthday, how he likes his peanut butter sandwiches cut, but I couldn’t have told you his favorite color, the name of his second grade teacher, or his third for that matter. In the wake of a huge commitment, and in the face of a lifelong one, I found that I needed to know everything. My poor husband put up with question after question, let me badger him when he came home from work about the minute details of his day.

Eventually, I gave up the pursuit, and realized something I should have known all along–I knew the man as well as one can know another human being. That there are parts of each of us that we keep hidden from the rest of the world, and sometimes even ourselves. That marriage–that all human relationships–are at heart gigantic leaps of faith.

So I guess the next time someone asks me where my ideas come from, I may just have to say my subconscious. And as I embark on this third book, I know I won’t understand its genesis until much, much later, long after I’ve written it’s final pages. But let’s be honest: an idea store would be nice.
~~~~~~~

Thanks so much for sharing this wonderful guest post with us Julie! I can’t wait for your next novel to come out! I want to be first in line to read it!

Courtesy of Julie herself, I have one copy of her novel After You to share with one of my lucky readers. What do you need to do to enter…

This giveaway is open to US & Canadian residents only and I will draw for the winner on Sunday, November 29, 2009. Good luck everyone!