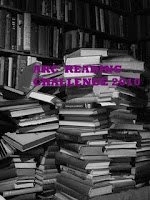 Well of course I’m joining in the ARC Reading Challenge for 2010. It is being hosted again by my good friend Teddy from So Many Precious Books, So Little Time. Thanks for hosting this great challenge again Teddy! It’s going to run from January 2 – December 30, 2010 and you can head over to Teddy’s blog and check out all the details here and join in the fun.

Now there are various levels to choose from but I’m choosing Level Gold which is to read 25 or more ARCs. If you saw my earlier post on my stats from 2009 for this challenge, you know I should definitely manage to surpass this amount. I’m not going to list the ones I’m going to read because often it changes so I’m just going to use this post to keep track of the ones I do read.