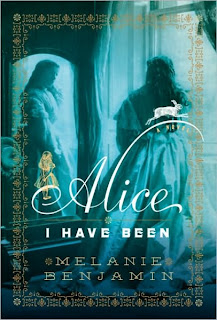 Imagine my surprise when I learned that Alice from Alice in Wonderland by Lewis Carroll was actually a real person, not just the fairy tale I had always imagined it to be. Well it’s true and in Melanie Benjamin’s fantastic work of historical fiction, Alice I Have Been, we are given a great story that weaves fact with fiction about the real life of Alice Pleasance Hargreaves.

The story begins as Alice, eighty years old now, is reminiscing about her past and what a life she’s had! Not for the first time in all of her years does Alice think to herself that she wishes she was known to the world for herself instead of just ‘Alice’ – she’s always wondered which was the real Alice and which was the pretend Alice.

It’s 1859 in Oxford and Alice was seven years old and quite a handful. She wasn’t the typical girl of the times; she liked to be a little more troublesome than that. Alice was used to a life of privilege life as her father was the Dean of Christ Church yet it was really her mother who ran things. A mother that Alice can’t seem to make happy and who Alice has a rocky relationship with her whole life.

Mr. Dodgson (Lewis Carroll) had been in Alice’s life from the time she was a little girl. Mr. Dodgson would take Alice and her sisters Ina and Edith walking, rowing, or he could be found taking pictures of them. It seemed Mr. Dodgson had a hankering for taking pictures of young girls and this is a fact. In truth, I found that very creepy. While he never did anything inappropriate with the girls (that we know of) he did only photograph young girls and as seen in the picture below, it seems quite inappropriate for that time or even now when considering Alice is only seven years old in this picture. For Alice she views Mr. Dodgson as a friend, however as she grows older I think it was much more of a crush which isn’t odd for a young girl. What’s odd is an adult taking advantage of it. I will say that the author portrays this relationship, while disturbing, with grace.

On one such day that Mr. Dodgson takes the girls on an outing he tells them the story of Alice. Alice recognizes herself in this story and after this day constantly badgers Mr. Dodgson to write it down for her which he eventually does and which ultimately becomes Alice in Wonderland. Somewhere along the line it got back to Alice’s parents that the relationship between Alice and Mr. Dodgson seemed entirely inappropriate and it was brought to a halt. It is obvious that something big occurred to bring about this change but in this story and in history it’s not known exactly what happened. Alice, nor her sisters, were allowed any more contact with Mr. Dodgson.

Alice’s life goes on from this point. She grows up and meets what seems to be the love of her life in Prince Leopold. It even seems as though there will be a break from tradition and they will be allowed to marry. Unfortunately for Alice, her past comes back to haunt her and she is separated from Leopold; something that breaks her heart. Eventually a man, Reginald Hargreaves, sees past the whole Alice in Wonderland persona, and sees Alice for who she is and they marry. They go on to have three sons and a wonderful life but Alice always pines for Leopold, even going as far as naming one of her sons for him.

Later in her life after many hardships Alice realizes just what she had in her husband Regi; the one man who accepted her for being just ‘Alice’, while everyone else in her life always compared her to Alice in Wonderland.

This is such a well written and beautiful book. It’s really difficult to portray one’s thoughts about it in a few paragraphs because it’s such a complex and rich story. It’s really one worth reading and you will find yourself becoming invested in Alice’s life and caring about this woman who you hadn’t known before this point as anything other than Alice in Wonderland – a fairy tale. She was a real woman with real hopes and dreams who at times had her life shattered but was strong enough to always build herself back up.

My Thanks… to Pump Up Your Book for my review copy of Alice I Have Been by Melanie Benjamin.

I have one copy of Alice I Have Been by Melanie Benjamin up for giveaway courtesy of Cheryl with Pump Up Your Book and the publisher Random House.

To enter just leave me a comment telling me what your favorite fairy tale is. Be sure to leave me a way to contact you as well.

This giveaway is open to US & Canadian residents only and I will draw for the winner on Sunday, February 7, 2010. Good luck everyone!