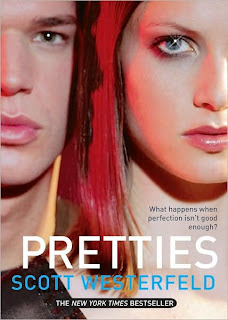 Pretties is the second in Scott Westerfeld’s dystopian series following Uglies (my review) which I loved! While I didn’t find Pretties as ‘on the edge of my seat’ exciting, I still loved it! The one thing I really liked is that I’m already a part of this world of Tally’s so I’m familiar with the people and what’s going on. It felt like getting together with old friends on their next adventure. Just as a note this review will contain spoilers from the first book so if you’re planning on reading the series, you may not want to go any further.

In Pretties, Tally is now a pretty. She’s beautiful and has everything she could want now except of course the ability to think on her own anymore. She’s heading to the parties and drinking all night, only to be hung over the whole next day and then start over. This is the life of a new pretty. Tally’s only concern right now is to make it into the Crim clique – even in the world of Pretties, there are still the ‘in’ groups in which to belong. All of her old friends – Shay and Peris- belong to the this group along with an intriguing boy named Zane, who is the leader. Of course Tally makes it into this desired group and not only that she seems to attract the attention of Zane.

However Tally keeps having these nagging thoughts about what she assumes is her past but they are a jumble. This is where she and Zane really connect. Zane explains things to Tally, how you can stay bubbly to keep your mind alert instead of in a fog. When bubbly, things appear a lot more clear to Tally. In the meantime, someone from her past shows up and leaves her the pills to make her normal again along with the letter she wrote herself back in Uglies. Tally is terrified to take the pills – there is two of them – Zane is with her when she finds them. Yes, you guessed it; they each take one. Now the question is, was this a really good idea to take these pills or not?

The second half of the book really picks up and kept me on the edge of my seat again while I was very busy rooting for Tally and Zane to become normal again. Together they make a great couple and I enjoyed them together much more than Tally and David. Zane just seems to be the other half of Tally for some reason. Again I loved Tally. She is still my favorite character in this series. However do things ever really go smoothly where Tally is concerned? It seems she can’t escape the pretty world no matter how hard she tries.

Once again I was left hanging at the end of the book wanting more! Thankfully I had Specials ready and waiting and have, of course, given it a teeny tiny start already. I just can’t seem to control myself once I start one of these books. This is a great series that I am thoroughly enjoying!