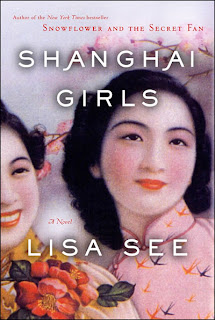 Shanghai Girls by Lisa See is about two sisters, Pearl and May, and starts out in the year 1937 and ending in 1957. The first part of the story brings us the sights and sounds of Shanghai and later we move on to the US and learn of the struggles they encounter there. It’s an emotional novel in many ways and it brings to light the discrimination that people feel when going to another country, the way life is for women in other countries, and the love that can exist between two sisters that can’t be broken.

Pearl and May work as Beautiful Girls in Shanghai – they pose for calendars and various advertisements. Pearl is twenty-one and May is a few years younger. They are used to and have been brought up with the good life.; they’ve never wanted for anything. Their father owns a successful rickshaw business and his girls have been given many advantages that others haven’t. With life the way it is the girls don’t really adhere to the authority of their parents or the traditions that should be followed. They are much more concerned with having fun. Both girls are outgoing but May seems to be the more beautiful one. The girls spend their time going shopping and to clubs so needless to say they are shocked when one day they are informed by their father that he has lost everything they own and he is marrying them off to save the family.

The girls are to be married off to men who have traveled from Los Angeles to find themselves Chinese brides. The girls are horrified as they had always planned to marry for love, but go along with their family’s wishes; they have no choice as they are now penniless. The girls marry and their husbands go back to the US and the girls are to follow. The girls being defiant as usual do not do what they are supposed to and end up in an even worse situation. They are now trapped in a country at war and are forced to face unbearable hardships to get out of the country – hardships that will break them both emotionally and physically.

Finally they make it to Los Angeles and to the home of their husbands which comes as a bit of a shock to them as well as they thought they were much better off than they are. However this is their life now so they work to make the best of it and at least they are still together. Life is very different for them now and many times Pearl can’t believe this is the life they are actually living. Pearl is constantly working, either at home or in the family owned businesses while May has had the opportunity to live a more carefree lifestyle even with the restrictions put on them by the family.

What I found most memorable about this book was the bond and the loyalty between Pearl and May and the courage of people to make it against all odds. As well the discrimination they suffered when coming to the US was interesting as well. it’s a shame that people aren’t just accepted for who they are and many times while reading what they went through it made me angry. Another thing of interest to me was what life was like for these women. Thankfully foot binding wasn’t happening when they were born but still women were considered as nothing in China and that even folded over to their lives in the US. They hold no value at all and that is really hard to read.

I read Shanghai Girls for Lisa See’s blog tour with TLC Book Tours and I really enjoyed it. Once I started reading it I had trouble putting it down as I needed to know what would happen next to these girls. I’ve got Lisa’s other two books, Snow Flower and the Secret Fan and Peony in Love on my shelf and I’m really looking forward to them. I have to say that Shanghai Girls really ends in the middle of nowhere. I was shocked when I got to the last page as I still expected more story but that leads me to believe there will be a sequel and that I’m looking forward to.

My thanks… to Lisa with TLC Book Tours for my review copy of Shanghai Girls.