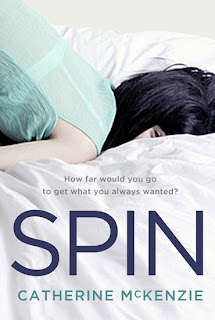 Spin by Catherine McKenzie is a fresh and fun, yet serious debut novel from this author! For me it was a perfect escape to another world with characters I loved and a storyline that grabbed me from the beginning to the end.

The main character of Spin is Kate Sanford and she’s a Bridget Jones type of character. I liked her right off. She’s one of those characters that I formed a bond with from the beginning of the book. She’s funny, a little crazy, vulnerable and just may have a serious problem with alcohol which just makes her all the more real. She’s far from perfect and I think that’s the trait that pulls people in – she’s human.

The book starts out with Kate getting the interview of her lifetime to work at her favorite music magazine. She’s beside herself in her excitement so when she gets a call from a friend to go out and celebrate for her birthday coming up, she agrees. What can a couple of drinks hurt? Then she’ll come home, get a good rest and be in prime form for her interview. NOT! What starts as a few drinks quickly turns into too many drinks to count and Kate is hammered. She wakes up late the next morning, is late to her interview and even that isn’t so bad if she’d just been sober for said interview. Needless to say Kate doesn’t even get through the interview, doesn’t get the job and goes home defeated and miserable.

Days later Kate gets a call from Bob, another boss at The Line, who works on the gossip side of things. While he didn’t think Kate was right for the job she applied for, he does think she’s right for going to rehab as a patient to spy on It Girl, Amber Sheppard for them. In return for a good story, she just might be reconsidered for that job of a lifetime she wants. Well, what is a girl to do? Kate is more than positive she doesn’t need rehab – she doesn’t have a drinking problem – but for this job she’ll do pretty much anything so she agrees to go.

Kate heads into rehab and slowly finds herself becoming involved with the program and the people. As time goes by and she thinks about her past she starts to wonder if maybe she does have a bit of a problem with alcohol. Certainly her life has been badly affected by it at times. Not only that but Kate is finding that the people there are real people with real problems and even finds herself becoming close with some of them. One of those someones being Amber – It Girl Amber – the famed celebrity.

Amber’s not such a bad person. Kate actually likes her. Now what is a girl to do? Kate is torn. She doesn’t want to hurt Amber but she really wants this job, not to mention if she doesn’t go through with writing her article she’s going to be sued for a sum that she just can’t afford. Kate’s not sure she’s willing to give up the new friendships she’s developed just to write this article. There has to be a way around this – but what could it be?

While this novel is funny and amusing, it has it’s serious side with the issue of drug addiction. Kate takes a good long look at herself and finds a lot of pieces missing – pieces she has missed having around her like her family. She’s realized that just maybe rehab wasn’t such a bad idea in so many ways – it gives hope that a new life is out there if you just look for it. Spin is about Kate finding herself again and you will find yourself rooting for her all the way and turning the pages as fast as you can to see what comes next!

Currently Spin by Catherine McKenzie is available only in Canada and can be purchased here. Be sure to pop in and visit Catherine Mckenzie’s website as well and check out the Browse Inside feature at HarperCollins Canada to learn more about the novel! Stay tune tomorrow when Catherine stops by with a guest post and maybe a few other surprises!