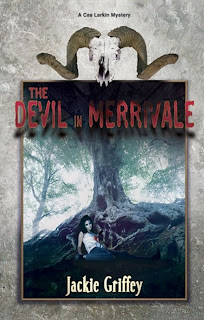 The Devil in Merrivale by Jackie Griffey is a nice cozy mystery to settle in with on a cold night and that’s exactly what I did the last few days. There isn’t anything face paced about it; it’s just a cozy story that introduces you to the people of small town Merrivale when they are faced with the murder of one of their more popular students.

When Denise Davis is founded murdered in the woods, it sets the town on edge. This kind of thing just doesn’t happen in Merrivale. Sheriff Cas Larkin is determined to find out what happened to this sweet teenage girl that everyone seemed to like. Who would want to murder her? To top things off Sheriff Larkin is dealing with cattle thieves as well. What’s happened to his quaint little town?

What Sheriff Larkin discovers is some kind of a club that looks suspiciously like it’s into devil worship or some such thing which may also explain his missing cattle problem. He’s not impressed at all and sets out to try and put all the pieces together. As things start to come together he has all kinds of thoughts as to what might have happened. Was Denise involved in this ‘club’? It seems she wasn’t killed where she was found – could they have used her as some sort of sacrifice? And what’s making matters even worse is that it looks like the leader of this club might just be the county judge’s son.

I found this to be an enjoyable book especially if you like a cozy mystery. Sheriff Larkin was really likable as was his secretary Gladys. A lot of the characters didn’t have big parts yet the way the author includes them in the story makes you like them immediately or not like them depending on how they are described. There’s a nice little background mystery going on so that when it all culminates in the end you are left satisfied. I would be open to reading more from Jackie Griffey.

My Thanks…to Dorothy with Pump Up Your Book for my review copy of The Devil in Merrivale by Jackie Griffey.