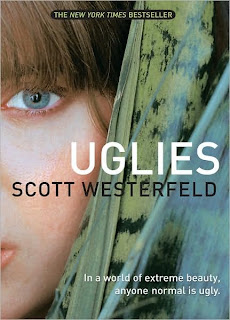 I’m sure I’m close to the last person in the blogging world to read the Uglies series but that’s ok. I am now and I’m loving them. Uglies by Scott Westerfeld was a great read for me. I enjoyed it so much that when I finished it I moved on to Pretties right away (already finished that one too-review on it’s way). What a great series! Anyhow, on to what I thought of Uglies.

Uglies is about a post-apocalyptic world where everyone is changed to a pretty when they turn sixteen. The purpose is if you make everyone pretty then nobody can be judged on their appearance alone – everyone is on equal ground. The rest of the world, our present world presumably, has been destroyed; they called the people of this world the Rusties. The Pretties are pretty much mindless people living life to the fullest or as full as you can when you really don’t do any thinking anymore and the worst thing is they don’t even realize this is what has happened to them.

The book centers on Tally Youngblood. She’s fifteen and living in the dorms for uglies while waiting to become a pretty on her sixteenth birthday. She can’t wait; she longingly watches out her dorm window towards where the pretties are always partying. As well her friend Peris turned pretty before her and she’s lost without him. They were best friends and she can’t wait until they are together again.

Then Tally meets another girl with the same birthday as her – Shay, and they become fast friends playing tricks together and causing the normal ‘ugly’ trouble. Shay is different from Tally’s other friends though. She questions becoming pretty and takes Tally to the Rusty Ruins and tells her about some mysterious place called the Smoke where uglies live like normal people. This makes no sense to Tally. Why would anybody not want to become pretty but it seems that Shay doesn’t.

On Tally’s sixteenth birthday she is ready to go and have her operation and be a pretty. Imagine her surprise when she’s told she can’t become a pretty until she finds Shay who ran away and leads the Specials to the Smoke. At first Tally resists but then realizes that there is no way she’ll have the life she wants if she doesn’t do this. So, she agrees to find Shay and the people of the Smoke.

What Tally doesn’t expect when she finds the Smoke is that these people aren’t so bad and neither is this life. Unexpectedly Tally finds that she cares about these people and doesn’t want to expose them but is it too late? Is it too late for all them, including Tally?

Uglies is a great look into what a society would be if people were manipulated into what those in higher power wanted for them. This book is action packed and keeps you turning the pages until the early morning hours to finish. Keep an eye out for my review of Pretties coming up soon as well.

My thanks…to me. I bought Uglies by Scott Westerfeld all by myself for my eReader.