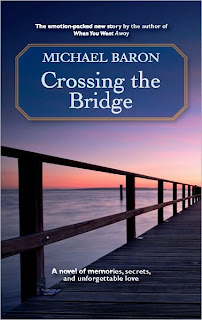 I’m really pleased to welcome Michael Baron back to Peeking Between the Pages. He visited with us a while back in conjunction with his novel When You Went Away and he wrote a terrific guest post. Now he’s back this time with his newest novel called Crossing the Bridge which released on January 5. One of the reasons I like having Michael here is because of his really wonderful and heartfelt guest posts and today he shares with us another one about how A Single Kiss can Change Your Life…

Much of the action in my new novel, Crossing the Bridge, stems from a single, monumental kiss. This is no normal kiss (how sad would it be if an essential moment in my novel was a “normal” kiss?). It’s a spontaneous, surreptitious one that has profound meaning for Hugh, the protagonist, but must never be repeated. This kiss literally changes his life — and while the kiss is revelatory, the changes are unfortunate, at least for a very long time.

I know from experience that a single kiss can have this kind of impact. Happily, my own path to this discovery was much less fraught than Hugh’s. I was walking on a Manhattan street with Anne, a woman who had, over the past couple of years, become my very best friend. We shared a fascination with books, music, food, and coffee, she regularly made me laugh, and she was one of the few people I’d ever met who could get me to open up about the things that were really important to me. She was also beautiful and I was very definitely attracted to her. Still, I had never pursued a romantic relationship with her. When we’d become friends, I was married, so romance wasn’t a consideration. My marriage ended about a year later, but by that point, Anne and I were such good friends, and I so completely needed a good friend, that I wasn’t willing to risk what we already had.

This night, though, as I walked her back to her apartment, something felt different. We’d been to a Mexican restaurant we frequented, and I could have attributed this feeling to the Margaritas, but I’d only had one and the restaurant used criminally little tequila in their drinks. In all likelihood, it had something to do with the conversation we’d had during our enchiladas. She told me some new things about her family that night and that got me talking about some long-undiscussed memories, and it just seemed as though we’d gotten to know each other at another level. As we walked down her block, I thought about how I’d feel if Anne got a serious boyfriend. She’d dated a number of men since we’d been friends, but hadn’t stuck with any of them for very long. The notion that she might fall in love with someone — and mind you this was all in my head; she hadn’t mentioned a guy in months — devastated me. By the time we got to the door of her building, I was filled with an entirely fabricated sense of loss.

So when we moved to hug goodbye as we always did, I kissed her instead. Remarkably, she didn’t seem surprised by this in any way. Even more remarkably, the kiss exceeded any anticipation I had for the kiss. It was eternal and electrifying at the same time. In the days and weeks that followed, we came to realize that any fears we had about romance screwing up our friendship were unfounded. The depth of our friendship was an indicator of how much we were meant to be together, not a barrier. Anne and I got married a year and a half later and we’ve been together ever since.

The memory of that kiss remains one of the strongest memories I have. It was then that I realized that a single kiss can change your life.
__________

Thank you so much for that guest post Michael and what a wonderful story! Being married to your best friend is awesome!

Here’s a bit about Michael’s newest novel Crossing the Bridge from Amazon.com:

Hugh Penders has been stuck in neutral for nearly a decade since his brother Chase died in a car accident. He carries with him two secrets that he has never been able to share with anyone: that he believes he might have been able to prevent the accident, and that he was deeply in love with Chase’s girlfriend, Iris.

When Hugh’s father suffers a debilitating heart attack, Hugh must return to the New England home he’s been running away from for the past ten years. One day, he encounters Iris – who has long since moved away – on the street. They begin a friendship and Hugh believes he’s falling in love with Iris all over again.

But the ghost of Chase haunts both of them. And when each reveals a truth the other never knew, their lives, their vision of Chase, and their chances for a future together will change forever.

Charged by the power of desire and the impact of loss, Crossing the Bridge is a soulful, romantic novel that will speak to you deeply.

*To purchase Crossing the Bridge you can go here in the US and here in Canada.

Now this giveaway is going to be a little different in that it isn’t for Michael’s newest novel, Crossing the Bridge which just released. It is actually going to be for a signed advance copy of his next novel, The Journey Home which is due out in May 2010. Isn’t that just awesome! It sounds like another terrific novel from Michael Baron. Take a peak at what The Journey Home is about over on Amazon. 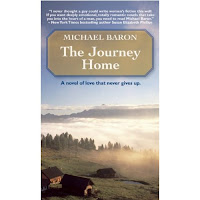 This giveaway is open to US & Canadian residents only and I’ll be drawing for the winner on Sunday, January 31, 2010. Good luck to you all!

Be sure to check both of my sidebars for other great giveaways!