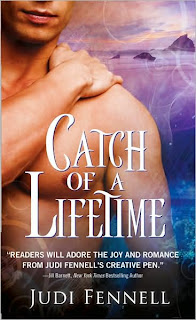 Catch of a Lifetime is the final book in the Mer trilogy by author Judi Fennell and it’s another very creative and fun filled romp through the underwater fantasy world of the Mer people mixing with us humans. The other two books In Over Her Head and Wild Blue Under were both great reads as well but I have to admit to Catch of a Lifetime being my favorite. I’m not sure why; maybe because there was a cute little boy included in the story this time or maybe it’s because mermaid Angel is just a really likable character. Whichever it was, the fact remains that this book was a good read for me!

All of the books have been about the Tritone family and this one is no different. This time it is Angel Tritone that gets herself into hot water but on land. Angel is the youngest in the family and has always felt the need to prove herself to her family but even more so now that she wants her brother Rod to put her in charge of the Coalition – it’s purpose to help Mer-Human relations along with the goal of saving the planet.

However things don’t always go too smoothly for Angel and while out trying to gather more information she ends up being chased by a shark. To save herself she climbs aboard a boat and even worse, the fact that she’s a mermaid is found out by none other than a human child, Michael, and he plainly adores her. The next morning she meets Logan who is more than a little shocked to find a naked and very beautiful woman on his boat. Oh man, he’s in trouble! For her part Angel thinks that this is the perfect opportunity to learn more about Mer and human relations and if she’s to be honest with herself, Logan is pretty easy on the eyes.

I don’t want to give any of the story away but it’s easy enough to say that, of course, Angel doesn’t want Logan to know she’s a mermaid so falling in love with him is a huge mistake not to mention kind of forbidden by the council back home. Her brother will have a hissy fit for sure! From start to finish Catch of a Lifetime is full of plenty of action both out of the bedroom and in! For Logan the stakes are much higher when he learns what Angel is because this puts both him and his son in jeopardy. What will Logan do? Will love win over all else? Will he fight for Angel or let her go?

Catch of a Lifetime was such fun! I’m really sad to see this series end because, although I don’t read a lot of books of this kind, I’ve always enjoyed Judi’s books as an escape from my world for a little while and I’ll miss that. However, I think she’s going to be starting something new so I have that to look forward to! I think one of my favorite parts of the book are the little puns scattered throughout that kept me laughing such as: mer-minding for babysitting, on the other fin for on the other hand, head over fins in love and face to fin dialogue are just among a few.

Take a peek at Judi Fennell’s website! You can buy Catch of a Lifetime here in the US and here in Canada. Be sure to pop by tomorrow when Judi Fennell visits Peeking Between the Pages with a fun filled interview!

My thanks…to Danielle with Sourcebooks for my review copy of Catch of a Lifetime by Judi Fennell.