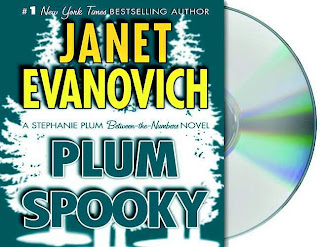 Plum Spooky by Janet Evanovich was just downright hilarious! I never tire of these books. I know some are but I still get a huge kick out of them and read them purely for entertainment value. That is exactly what I got while listening to Plum Spooky earlier this week and it was just what I needed! I won this audio book ages ago from my good friend Serena over at Savvy Verse & Wit and just got around to listening to it.

In Plum Spooky, Stephanie is after a dude named Munch and as usual ends up getting in a whole mess of trouble while trying to apprehend one criminal. To top things off she ends up babysitting a monkey and comes home to find Diesel in her apartment. I love Diesel and really like when he shows up in one of the books. He’s after his cousin Wulf who is a crazy man and of course Stephanie manages to get herself into a mess regarding him too since Munch has gone into a partnership with him in the hopes of running the world. Munch just wants to get girls, Stephanie being his first he hopes.

This is definitely one of the more unusual Plum books and mostly in the world of ‘wacko’ but if you take it for what it is, you have fun with it. Grandma Mazur makes an appearance and that never fails to get a laugh out of me – she is just too funny. Lulu is as nuts as ever and freaking out over everything. I did miss having more of Morelli and Ranger in the mix but I do like Diesel and the weird things he can do.