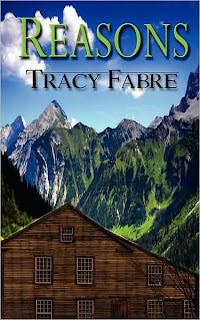 Reasons by Tracy Fabre is one of those books I would call a cozy read – one where I feel I’m visiting with people I might know in my own life. The author writes in such a way that she brings us into her characters lives so easily that before we know it we are invested in the story.

The main character Delphi Brent is a young woman who has decided to spend her summer out on a ranch in Colorado with old family friends . Delphi hasn’t seen the Laughlin family in nine years to be exact which just happens to coincide with a devastating hit and run accident that left, at the time, 17 year old Delphi recovering for a long time and as a reminder of that awful day, a bad leg with a huge scar and a limp when she’s tired.

The thing is her parents are dead set against her going. Delphi has never understood why her parents just stopped going to see the Laughlins after her accident and now this. Even as her parents sit her down and explain to her that the car that hit her and left her to die was owned by one of the three Laughlin sons who never even came back to make sure whoever they hit was ok, she is wishing she had never been told the truth. At the same time, Delphi’s accident coincided with one of the Laughlin boys, Artie, dying.

Still Delphi heads out to the ranch. She wants to see Annie and Robert so badly and truthfully she wants to see if she can’t find out what really happened that day and who was behind the wheel of the car when she was hit. What she doesn’t plan on however is finding love, especially finding love with a man who may have been the said someone who hit her and left her to die. Oh this summer is really heating up in unexpected ways and Delphi doesn’t know which way to turn.

Delphi is a great character, by far my favorite. I loved her spunky, sassy self. She’s definitely not one to take anything from anyone without offering up a less than favorable opinion of her own usually. Many times I found myself laughing out loud at something she said. That being said really all of the characters in this novel are endearing in their own way and again I’ll say I felt like I was visiting family or friends of my own.

At first glance this novel seems like an easy read and it is – it’s a shorter novel so it’s a fast read. However there is so much more in the mystery behind finding out who really hit Delphi and how it affected those involved. You can always try to bury secrets but they never really stay down. They always come back to haunt you and destroy your life in so many ways. I liked the ending of this novel as well. Even though secrets were brought into the open and things that had happened were better understood they weren’t used to hurt anyone else. All in all a pleasant book to read that started out a bit slow for me but once it picked up I couldn’t put it down until I found out what had happened all those years ago. Of course, the cute little romance didn’t hurt one bit!

Reasons by Tracy Fabre can be purchased here in the US and here in Canada. Be sure to take a look at Tracy Fabre’s website and check out all her books!

My review copy of Reasons by Tracy Fabre courtesy of Renee@Stimulating-Conversation.com