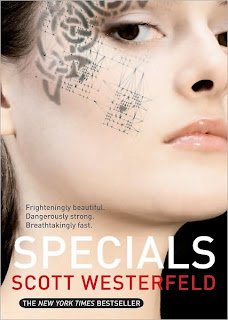 Specials is the third book in the popular Dystopian Uglies series by Scott Westerfeld and while I didn’t like it as much as the other two I still enjoyed it. Again, for those wanting to read the series you may want to skip reading this as there is no possible way to avoid spoilers from the first two books.

At the end of Pretties Tally is captured again and this time she wakes up as a Special, but a different branch of them called Cutters and her friend Shay runs the group. The Cutters are more powerful and very much more adventurous than a regular Special with unbreakable ceramic bones, sharp teeth and nails, better hearing and vision – basically they are like machines. They cut themselves to feel more ‘icy’ meaning more in control of the situation they’re in.

Tally’s biggest issue is that Zane is not with her. Zane was Tally’s boyfriend who in Pretties ingested some pills with her to take care of the lesions in their head but unfortunately he got the pill that ate up his mind instead. Tally wants Zane to be a Cutter because she is completely turned off by him being just a pretty. One thing the Cutters seem to have is a very over-inflated ego and they feel they are above all others. So she keeps at Shay until Shay agrees to make Zane a Special but with conditions. Zane must lead them to the New Smoke.

Even though Tally is this machine like person now, she still seems to have some of her old Tally self lingering. When Zane tells Tally to start thinking for herself again, this starts her to wondering what this new life of hers is really all about. Then Tally and Shay decide to pull off a stunt that changes everything, even the scope of their own world and when Tally reaches the New Smoke she realizes how much.

The story takes off from here and we’re back to hoverboarding everywhere and Tally doing things that made me hold my breath at times. Tally is still my favorite character but at times I was annoyed with her in this book because she so easily followed Shay. I know she was programmed to be the way she was and over the course of the story she does try to think for herself again and that brings me back to liking her again. I think it’s important that Tally realized that she didn’t need to cut herself to be special – a very important point to get across.

Specials is the final book in the Uglies trilogy and for me it both disappointed me in some ways and impressed me in others and well that’s all I can say about that without ruining the story for anyone. I will say though that the ending did surprise me as it wasn’t what I expected and while it wasn’t what I may have wanted, it was a satisfying end to the trilogy. There is another book Extras but it isn’t a continuation of this story. I will read it at some point but not right now. You can see my reviews of Uglies here and Pretties here; the first two books in the series.