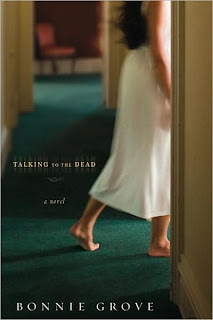 Talking to the Dead by Bonnie Grove is a vivid portrayal of a woman’s journey through her grief and memories. One would think that this would be a complete downer of a book but it’s not. The main character is kind of amusing in some of the things she does, says and thinks and there is a bit of a mystery surrounding this story that makes it a definite page turner. This book still haunts me with the emotions of grief felt, faced, and overcome.

Kate Davis is in her twenties and a widow. Not only a widow but a widow whose dead husband is still talking to her. Kate’s husband died quite unexpectedly and it’s left her a wreck. She just can’t seem to move forward at all – she’s not washing her hair, not eating, and there is no way she can sleep in their bedroom. Instead she is camped out on her living room floor. Kate thinks she may be going crazy hearing her husband’s voice and the worst thing is that she can’t remember a thing from before he died.

Finally Kate decides to seek help. She tries a variety of therapists; none of which are suited to her. Eventually she finds a psychiatrist who she at least seems to connect with and begins to take a look at what might be causing her to hear her husband’s voice. It’s definitely not a smooth journey as along the way hidden truths are uncovered that rock Kate to her core. People she thought she knew and trusted had betrayed her, including her dead husband Kevin.

Kate’s journey to recovery takes her from going more than a little crazy at times which lands her in a mental institution all the way to meeting a man, Jack, who may be the key to helping her deal with her past. Jack is a pastor, although not really a traditional kind, who Kate meets while going to support meetings and with his quiet, easy manner, he starts to earn her trust and friendship.

The book flips back and forth from Kate in the present to flashbacks of Kate’s memories and it’s very well done. The author’s portrayal of Kate instantly draws you in and holds you in the story. Kate is a character I think we can all relate to in some way especially those who have lost someone important to them. The novel chronicles her grief, anger and helplessness but also shows that life moves on one day at a time and each day gets a little bit easier until you feel you can finally breathe without your world falling apart.

Talking to the Dead is Bonnie Grove’s first novel and it’s beautifully written and I would absolutely read more of her work. This is a Christian novel which I always enjoy but this one would really suit anyone as this element is not pushed at all. It is mentioned but not in a way to overwhelm anyone and really not until the end of the novel. You can buy Talking to the Dead here in the US and here in Canada. Be sure to visit Bonnie Grove’s website as well.