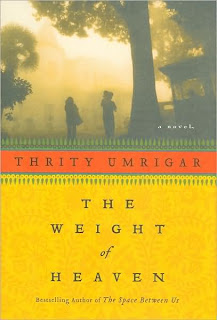 In The Weight of Heaven by Thrity Umrigar we are introduced to two people, Ellie and Frank, who are suffering greatly from the loss of their only son Benny to a sudden illness. They are devastated and between withdrawing and placing blame, their relationship is suffering a great deal; something neither of them is familiar with as they had always been so deeply committed to each other. After their son’s death, Frank is offered a job in Girbaug, India managing a HerbalSolutions plant and while he doesn’t want to take the job, Ellie thinks it’s best they do.

They move to Girbaug and Ellie loves it there but Frank is struggling. Ellie’s thoughts of this being the perfect place for them to start over in their lives together doesn’t seem to be happening. Frank is still withdrawn and inclined to bring up blaming Ellie for their son’s death and that only causes them to argue. Frank knows he’s hurting Ellie but he just can’t seem to stop himself; he’s hurting, his world has fallen apart, and he’s taking it out on the person closest to him. Of course it wasn’t Ellie’s fault that Benny had died; the doctors had said so. There was nothing that anybody could have done but that doesn’t seem to ease the pain or anger.

Ellie loves India and being a psychologist she has been spending her time counseling people. Everyone seems to like her and she’s really enjoying her work. Frank on the other hand has ended up with nothing but problems running his plant. It’s an American company and the workers aren’t paid well and they are also angry because HerbalSolutions has taken away the use of the leaves of a tree that the people have used forever for healing purposes. Frank is under a great deal of stress.

The only solace Frank seems to find is in a little boy named Ramesh. He’s the son of the man and women who take care of Frank and Ellie’s home and cook for them. Frank really becomes obsessed with Ramesh’s well being and feels he could give him a much better life than his own parents can and while this may be true, Ramesh still loves his parents. He is like any other normal, young boy though and he is taken with all the gifts he gets from Frank like new clothes, sneakers and even a computer. While Ramesh’s father is grateful for his son to get things he would otherwise not have, he is also fiercely jealous and angry over Frank seeming to want to take his boy from him.

I really liked Ellie in this novel. She was an easy character to like and she seemed very real to me in both her way of dealing with her son’s death and Frank’s behaviors. Frank I didn’t warm up too much although I can’t really pinpoint why. Maybe it was his desperation and his tendency to do whatever it takes to get what he wants. In this story Frank’s desperation leads him down a path that he can never come back from and the repercussions from his actions are devastating both to himself and others.

This is a very well written novel and I found myself turning the pages so fast I’m surprised I was able to absorb them. It’s not often a novel can shock me but the ending of this one did. One thing that Thrity Umrigar can do is draw people into her story. Sometimes I felt I was right in this story as I was feeling and dealing with the emotions of the characters – I truly felt the author had my heart in her hands at times while I was reading this book. It is the mark of a really good novel if it can make you feel that way.

My thanks…to Trish with TLC Book Tours for my review copy of The Weight of Heaven by Thrity Umrigar and the opportunity to participate in this tour.