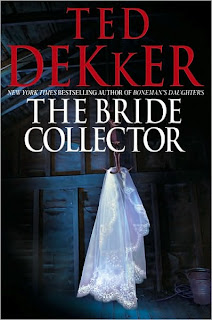 That’s right folks! I have 3 copies of Ted Dekker’s, The Bride Collector – soon to be released on April 13, 2010 up for grabs thanks to the wonderful Miriam at Hachette Book Group! I just reviewed it earlier today and I thought it was another great thriller from Dekker (my review).

Here’s a bit about the book from Hachette Book Group…

FBI Special agent Brad Raines is facing his toughest case yet. A Denver serial killer has killed four beautiful young women, leaving a bridal veil at each crime scene, and he’s picking up his pace. Unable to crack the case, Raines appeals for help from a most unusual source: residents of the Center for Wellness and Intelligence, a private psychiatric institution for mentally ill individuals whose are extraordinarily gifted.

It’s there that he meets Paradise, a young woman who witnessed her father murder her family and barely escaped his hand. Diagnosed with schizophrenia, Paradise may also have an extrasensory gift: the ability to experience the final moments of a person’s life when she touches the dead body.

In a desperate attempt to find the killer, Raines enlists Paradise’s help. In an effort to win her trust, he befriends this strange young woman and begins to see in her qualities that most ‘sane people’ sorely lack. Gradually, he starts to question whether sanity resides outside the hospital walls…or inside.

The FBI believes that the killer plans to murder seven women. Can Paradise help before it’s too late?

TED DEKKER is a New York Times bestselling author of more than twenty novels with a total of more than 3 million books in print. He is known for thrillers that combine adrenaline-laced plots with incredible confrontations between good and evil.

I have 3 copies of The Bride Collector by Ted Dekker to give away. The books will not be shipped to the winners until after the release date of April 13, 2010. To enter…

The giveaway is open to US & Canadian residents only (no PO boxes) as the books will ship directly from the publisher. I will be drawing for the winners on Saturday, April 3, 2010. Good luck to you all!