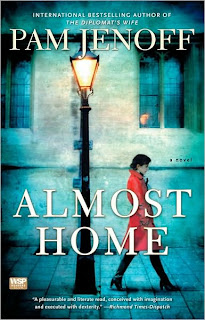 Almost Home by Pam Jenoff is the story of Jordan Weiss, who ten years ago was a student at Cambridge, feeling as though the world was at her doorstep – she was happy, she was on a rowing team, and she had a boyfriend she cared about. All that changed drastically when her boyfriend Jared drowned. Her world fell apart…

In the years to follow Jordan became a State Department intelligence officer. She has travelled all over the world on many dangerous assignments and that’s the life she likes. The one place she has managed to avoid going back to has been England and she doesn’t ever intend to either.

Yet when she receives a short note from her best friend Sarah, who suffers from ALS (Lou Gehrig’s disease- a terminal illness), asking her to come to see her, Jordan puts aside her dread about going back and goes forward with getting a job transfer to England. She wants to be with Sarah and help her for as long as she may have left.

Jordan comes face to face with her past the second she arrives in London. There are reminders everywhere of her past there with Jared. Not only that but shortly after arriving an old college mate from Cambridge, Chris, contacts her and tells her that he doesn’t think that Jared’s death was an accident; he thinks he was murdered.

So between Jordan working on a secret mission with an extremely attractive man named Sebastian and dealing with trying to find out what really happened to Jared, she is kept pretty busy. Things start really heating up though as she and Chris begin to get too close to what may be the truth – a truth that has startling consequences dating way back in history. Soon Jordan doesn’t know who to trust as her life and her friends around her are in immediate danger. What will happen? Will she uncover the truth of what happened to Jared? And what will that mean to her future?

Jordan is a great character and I really liked her. Right from the beginning Jordan’s character draws you into the story. Almost Home has elements of friendship, romance, politics and a thriller for sure. I found a few places a little slow in the beginning but once the story got going I couldn’t put it down and the last half of this book flies by so quickly. The end threw me completely for a loop. I didn’t expect what happened and I have to say that I’m very happy there is a sequel coming because I really want to know what happened after I turned that last page of Almost Home.

You can purchase Almost Home by Pam Jenoff here in the US and here in Canada. Be sure to pop in and visit Pam Jenoff’s website as well. Also, make sure to stop by Peeking Between the Pages tomorrow for a guest post from Pam Jenoff as she discusses Knowing Yourself as A Writer.

My review copy of Almost Home came directly from the author Pam Jenoff.