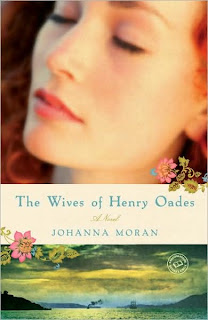 The Wives of Henry Oades is the debut novel of Johanna Moran and what a wonderful weaving of fact and fiction in this terrific novel! I will say right off that I loved this novel and it will be one of my favorites of this year. I found I couldn’t turn the pages fast enough in this book as the drama of the Oades family unfolded.

The story begins with Henry and Margaret, along with their children, travelling to New Zealand as Henry has gotten a bank position there. Margaret really doesn’t want to go because it means leaving family and friends but it’s only supposed to be for two years so she will follow her husband and remain a family. The voyage over is quite harrowing at times and that doesn’t help the situation not to mention that New Zealand is a bit of a surprise to Margaret in terms of living conditions that she’s not quite used to.

Then one evening after having been in New Zealand a while, the native Maori tribe, looking for revenge for one of their own that had been killed, kidnap Margaret and her children. Henry is devastated and completely beside himself with grief. He sets out to find them immediately only to end up injured himself and unable to carry on. By the time he is well enough to be on his own again, his family is presumed dead. At first Henry just can’t believe it but eventually he comes to feel that everyone is probably right and he leaves New Zealand for California.

In California, Henry works hard as a dairy man; hard enough that the man who owns the dairy farm leaves it to Henry when he passes on. On an evening in town a fire breaks out and Henry ends up taking care of a very pregnant woman who had been in the house that had been on fire. Her name is Nancy and she ends up losing her husband and later marries Henry. I think Henry felt a bond with Nancy as they both had lost the loves of their lives and that’s why in the beginning I think he wanted to marry her. However, later this turned to love for them both.

So Henry is happily living his life until the day that Margaret and the children, who escaped the Maori, show up on his doorstep. Naturally he is stunned as is his new wife Nancy. Margaret, who has spent the last six years yearning for her husband and telling her children about him at every chance, is just as stunned. She never imagined that her Henry would remarry. They all try to make the best of the situation but it doesn’t last long as sooner, rather than later, they are indicted for bigamy.

Johanna Moran writes beautifully and draws you into her characters lives so deeply that you can’t help but feel for all of them. Nancy, the new wife, is such a sweet woman trying to make the best of things while you know she’s breaking on the inside and then there’s Margaret who you can’t help but feel bad for as she’s had such a hard time of it only to find she’s lost her husband as well. Then there’s the kids who thankfully everyone tries to do the best for but how odd for them to be drawn into this situation as well. Henry I also sympathized with – what could he do – he loved Nancy now but he was too good a man to shirk his responsibilities to his first family.

This novel I think, above all else, is a book about the bond that women can forge together when they need to. Nancy didn’t give up on trying to include Margaret in the family and eventually Margaret warmed up to her and they became friends. Above all else these woman held their children and family in the highest regard and this in itself brought them together. I really can’t pick a side with these women. I felt for them both because they were both good woman. If one, at least, had been mean spirited it would have been easy to pick but that wasn’t the case. I think if you’re looking for a book club pick The Wives of Henry Oades would make a fantastic pick! There is just so much to discuss and you can be guaranteed on a lot of opinions when it comes to a case such as the one portrayed in this novel.

Courtesy of the publisher Random House I have one copy of The Wives of Henry Oades by Johanna Moran to share with my readers. To enter…

The giveaway is open to US & Canadian residents only (no PO boxes) as the publisher will be sending the book directly to the winner. I will draw for the winner on Saturday March 20, 2010. Good luck to you all!