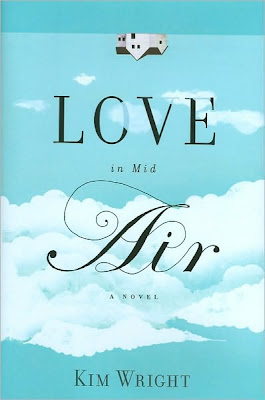 Love in Mid Air by Kim Wright was one of those novels I describe to myself and others as addictive.  It’s about a woman, Elyse, who is unhappy in her marriage and while on a plane trip home, meets a man that she finds herself extremely attracted to.  She goes back and forth with herself on whether to pursue this interest even though she has a husband and daughter at home.  Now I do have to say I don’t condone affairs yet this book and the character of Elyse are so much more than a woman just deciding to have an affair.

Elyse is approaching 40 and has been married for nine years.  The problem is she made a mistake in marrying Phil and while she’s tried over the years to make it work, especially for their seven year old daughter Tory, she knows she’s fighting a losing battle.  When Elyse met Phil she knew he wasn’t the normal type of man she went for but at the same time thought that  because he wasn’t, their relationship might just work.  He’s a good man, he’s provided her with a very comfortable lifestyle yet something has always been missing from this seemingly perfect world that really is more broken than perfect.

At first things seem ok but as time wears on and Elyse gets older she realizes just how unhappy she is.  Her chance meeting on the plane with Gerry is just the clincher in something she already knew – that her marriage was over and nothing was going to change that.   Elyse jumps into an affair with Gerry – it’s exciting, it’s different, and it’s fulfilling her in a way her marriage never did.  She has no romantic notions about Gerry; she knows that he isn’t going to leave his wife for her.  Yet that doesn’t seem to bother her; she shares all her thoughts and feelings with Gerry – in some ways I think this was healing for her as strange as that sounds.  She even tries counseling with her husband Phil but this doesn’t change her feelings; really it only seems to make her more determined to end her marriage.

In Elyse’s world, women stay in marriages even if they aren’t completely happy.  Really, who’s happy all the time?  They get up each day and carry on with their routines throughout the day, go home – make supper and get the kids ready for bed.  Another day over and yet did they find themselves really feeling happy at any time in that day?  Elyse is tired of  all that and in this novel she is very real and straight forward about it.  She doesn’t make any apologies for her flaws or what she wants.  She begins talking about it with her friends in her book club ultimately making everyone uncomfortable as they then have to step back and take a look at their own lives.

The author, Kim Wright, has a way of bringing her characters to life in a real and unflinching way.  Nothing is sugar coated.  I have never been married but have been in a long term relationship in which I felt very trapped.  I could feel Elyse’s unhappiness and I don’t think it’s about her wanting something more exciting for her life.  It’s about wanting something better, some reason to get up in the morning and look forward to the day and be happy about it.  Elyse feels that Phil doesn’t see her and doesn’t listen to her.  She needs to feel like she is somebody – somebody valuable.  I get that.  So while this book is about a marriage on the rocks and a woman wanting a divorce, you also need to look past that to the reasons behind it.  To the woman wanting more for herself- Elyse.

We often wonder how things get to a point where there isn’t any turning back but they do and most often it creeps up on you.  This novel is really quite intense and honest.  How well do we really know anyone’s lives?  We see people and think they’re happy – they seem happy but this isn’t always the case.  What lies under the veneer of happiness is sometimes intense loneliness and unhappiness.  Is it worth it to keep on and keep trying?  That’s a question with an answer that would be different for everyone.  What I really liked about Elyse’s story is that in the end she doesn’t have any fairy tale ending – there is no tall, dark and handsome man waiting – there is only she and her daughter looking to rebuild their lives.

This would make a great book club read.  There’s so much to discuss and it’s definitely a topic that would generate a lot of conversation.  Be forewarned though that there is some pretty graphic hanky panky going on and bad language.  It’s not overwhelming but it’s there.  This is Kim Wright’s first novel and I think it’s a solid book well worth reading.

I read Love in Mid Air by Kim Wright to start off her blog tour with Hachette Book Group.  You can see other tour stops here and you can purchase Love in Mid Air here in the US and here in Canada.  Be sure to pop back in tomorrow as Kim stops by to share a guest post with us.

My thanks…to Miriam with Hachette Book Group for my review copy of Love in Mid Air by Kim Wright.