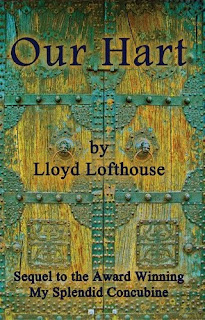 Our Hart by Lloyd Lofthouse is the sequel to My Splendid Concubine that I read and really enjoyed early last year. I have to say that I enjoyed Our Hart just as much and I really admire the author’s way of weaving fact with fiction to bring us a really great story. It was interesting to get involved in Robert Hart’s life again and see where the future took him and to be reacquainted with my favorite characters Aayou, Guan-jiah, and Robert himself.

Our Hart, named so for Robert, as he was so devoted to China and making it a better place for its people. Robert was a man who seemed to have a knack for calming relations between people and also for coming up with ideas to make things run more smoothly in China. He spent a lot of time learning the language, culture and the traditions – he truly cared for China and it’s people. Over the years, many important people came to rely and trust Robert’s opinions and ideas and carry them out. This led to many promotions for Robert and by the end of his career in China he was a very important man.

Robert is still devoted to Aayou, his concubine and is conflicted on whether to marry her or not. He knows his family wouldn’t approve and the thing is that neither would the important people in China that he deals with. All important men have concubines but they also have a more presentable wife for the public’s view. Robert can’t accept this as his love and devotion to Aayou is too great. He has children with Aayou; they have built a life. The only thing he regrets is how much time he has to spend away from her because of his job and it’s responsibilities. Aayou never minded though. She tried to explain to Robert that this was the way of China – he was an important man and the people depended on him – she was proud of him for that.

I love how much history of 1850’s China I came away with from reading this novel as well as learning more about the customs and traditions of this country. This novel is such a wonderful combination of history and a love story. You can’t help but come away touched by the love shared between Robert and Aayou. It was a very a special love; the two were devoted to each other. Robert was conflicted a great deal when he thought about his upbringing and what his family in Ireland would think of him having a concubine and having children with her. Yet this never stopped him; he continued to love her and against all advice still wanted to marry her.

I would recommend reading My Splendid Concubine before Our Hart only because you get so much more of the history behind the story. However a person could pick up Our Hart and not have any problem at all following the story. I just think you’d be missing a lot of the history of Robert and Aayou and that’s important to understanding them even further in Our Hart. Our Hart delves much more into the emotional side of Robert and Aayou’s life and I was deeply touched by it. I recommend both books to those interested not only in a beautiful love story but to those interested in reading books that are rich in the Chinese culture not to mention learning about a man, Robert Hart, who changed the face of China so many years ago.