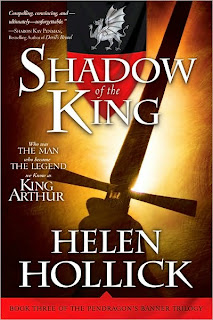 Helen Hollick brings history to life once again in Shadow of the King, the final book in the Pendragon’s Banner Trilogy. She weaves fact with fiction in such a way that keeps you spellbound and turning the pages as quickly as you can to find out what will happen. From love and loyalty to fighting raging battles there is never a boring moment.

I’ve been lucky enough to read the whole trilogy starting with The Kingmaking (my review here) and Pendragon’s Banner (my review here). It’s been an amazing journey watching Arthur and Gwenhwyfar move through their lives having children, being separated and fighting battles together.

Shadow of the King finds Arthur, Gwenhwyfar and their daughter Archfedd at Caer Caden. Arthur is now 33 years old and has been King for 11 years. All is not well though. Trouble is brewing as plots are being unfolded to try and take over Arthur’s Kingdom once again. Arthur is still dealing with his uncle Ambrosius wanting to bring the kingdom back under Roman rule; they have never seen eye to eye. However, this isn’t Arthur’s only problem this time – his son Cerdic also has his eye on what he believes to be his rightful birthright.

We meet many of the characters once again in Shadow of the King that have come before in previous novels. Some of my favorites being Bedwyr and Ider among a few. There were others introduced in this novel that I grew to really like as well – Cadwy and Ragnall being one couple but there are so many more. With Cadwy and Ragnall they both have a disability of sorts and Hollick writes of them coming together and finding a peace in each other that they hadn’t known before; it was a nice story.

Then there are those that we will dislike no matter what like Winnifred. Age hasn’t mellowed this woman at all and she is still bent on destroying Arthur. Her goal is to have her son Cerdic take over being King from Arthur but as the story progresses she gets a rude awakening in terms of what she really made her son into.

I liked that in Shadow of the King we got to see a more human side to Arthur; one that hurts and grieves and feels he can’t go on. The majority of the time Arthur is this big strong man that can take care of everything for everyone. This time the grief hits harder than even he can handle. He ends up disappearing out of Gwenhwyfar’s life for a while; she fears him dead. What he really is, is afraid – afraid to come back and face life as it may be and even more terrified of having to go into a battle once again. Can he come back and face a battle in order to gain control of his lands again? Can he again make a life with Gwenhwyfar?

It’s impossible to put this book of 672 pages into a review that will do it justice. In it’s entirety this is a series that you want to just lose yourself in and experience to the fullest. Helen Hollick writes in a way that takes you to the battlefield and just as fast takes you back to the romance of Arthur and Gwenhwyfar. I found myself holding my breath at times in battle and smiling over the bickering between Arthur and Gwen at others. As always, Arthur and Gwenhwyfar are my favorite characters – I liked them from the beginning and always rooted for them to stay together. They have a strong bond with each other that was always a pleasure to read about. Helen brings this story to life for her readers – you feel as though you are there – you are experiencing this story first hand and that’s really what makes it so wonderful.

I have to admit I’m sad to see the trilogy end but as anyone knows the legend of Arthur must end but Helen Hollick has put her own spin on the ending and it’s a great finish for the series. I will say that I did actually shed a tear or two over some losses in this novel that I wasn’t expecting but really, all that says is that this is a really well written and fantastic novel! To anyone who loves historical fiction you don’t want to miss the Pendragon’s Banner Trilogy. All of the books stand alone without a problem but I don’t think a person gets as much out of it if they don’t read all three and grow with the characters throughout.

My review copy of Shadow of the King by Helen Hollick was received from Sourcebooks. This is no way affected my opinion of this novel.