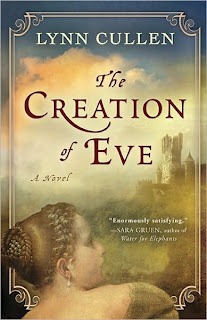 The Creation of Eve by Lynn Cullen is a historical fiction tale taking place between the years 1560-1568 in Spain. It is about a little known painter named Sofonisba Anguissola who became the first female painter to rise to prominence in the Italian Renaissance.

Sofonisba had even been invited to study under Michelangelo; something quite unheard of for a woman. It was there, as indicated from the first line in the book, ‘In the time it takes to pluck a hen, I have ruined myself’, that Sofi gives in to the sins of the flesh with Tiberio who also studies under Michelangelo. The Maestro himself walks in on them and Sofi is terrified the news will get back to her father and destroy him and her family.

However before any of Sofi’s secrets can be revealed she is summoned to be a lady-in-waiting and painting instructor to the new Queen of Spain, Elisabeth. Elisabeth is just fourteen years old and has been married off to the King of Spain, Filipe. As was usual in this time period, Elisabeth was used as a bargaining tool between countries; in this case by her mother Catherine de’Medici. Sofi could never have imagined what she was in for but she ends up in the middle of a love triangle between this young Queen, the King and the King’s half brother Don Juan. The Queen takes quite a liking to Sofi and insists upon Sofi and Sofi’s maid Francesca being the only ones to serve her most of the time. Sofi is also fiercely loyal to her young Queen and will do almost anything to aid her even if it’s not in her own best interests to do so.

Lynn Cullen has written a vivid and rich portrayal of life back in this time period. She gives us a view into the life of the Spanish court along with all the intrigue, petty jealousies, lies, and romances that it always involves and she makes you feel as though you are a part of this world in the novel. As with all historical novels I find it fascinating to read about how life was for the women of this time; how many restrictions they had on what they could and couldn’t do. Sofonisba was a very talented painter yet in her time that didn’t mean much. People wanted her to paint their portraits but being a woman she wasn’t able to sign them after she arrived in Spain and began painting for people of the King’s court.

This is such a full novel that it is impossible to encompass it all in a review but I would say if you love historical fiction then this is a book you would want to experience. I found some parts moved more slowly but for the most part I was engrossed in this novel and with the last half I found I had a hard time putting it down. Lynn Cullen writes beautifully and her ability to weave fact with fiction is wonderful. I enjoyed her characters very much especially Sofi, the Queen and Francesca but even the men in the novel were well developed and interesting. Also, I’ve never read anything before involving the Spanish court and King Filipe so I found that really interesting as well.

I read The Creation of Eve for Lynn Cullen’s blog tour with TLC Book Tours. You can see other tour stops for Lynn here. The Creation of Eve releases March 23, 2010 and can be pre-ordered here in the US and here in Canada. Be sure to pop in and visit Lynn Cullen’s website as well and check out the beautiful paintings! There’s also a reading group guide for your book club and you can invite Lynn to chat about the book with your club as well. So if you have a book club that are historical fiction fans, this would be a great pick!

My review copy of The Creation of Eve by Lynn Cullen provided by TLC Book Tours.