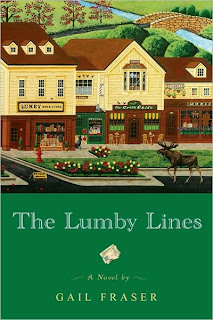 The Lumby Lines by Gail Fraser is one I would class as a comfort read.  It’s been compared to Jan Karon’s Mitford series which I loved – but I really didn’t find it like the Mitford series at all but still I found it enjoyable.  It started out slowly for me with the characters and story line being a bit confusing but once I got used to everyone I found myself not wanting to put the book down.

Mark and Pam Walker, a busy East Coast married couple, want something different from their lives and to spend more time together.  While vacationing in Wheatley where they’ve been numerous times they run across Montis Abbey – an old monastery that now stands abandoned on the outskirts of the little town of Lumby.  Lumby’s Main Street is described as…

Sounds divine to me.  The Walkers buy the property and set out to restore it to it’s former condition.  Their intention is to open it as a historic landmark country Inn.  As they go along costs tumble out of control but every time they look around and see what they have, their hopes of making it work keep them moving forward.

Along with the costs they also find that some of the citizens aren’t all that happy to have them there especially old William Beezer, the owner of the town newspaper.  Then there are others though who offer them support and help like a few of the old monks and others from the town.  Along the way old secrets are revealed and maybe some old angers are healed.

I found it hard at first to connect with any of the characters because I think too many were introduced.  While I have to say that I really didn’t form any strong connection to anyone in the story I liked several characters like the Walkers, Brooke and Joshua and several others from the town.  I like the way the author described the area and the things going on.  For me this was one of those that I call a slow and easy read that leaves you feeling good and we can all use that.  There are some cute little pictures throughout the book and a Sheriff’s Complaints section that came along quite often that was kind of funny as well as the newspaper articles from The Lumby Lines that were entertaining.

The Lumby Lines by Gail Fraser is the first in a series of five books.  You can visit Gail Fraser’s website to learn more about her books.  I do believe I will read more of this series.  I enjoyed this book and was left curious enough to want to know what will come next for the Walkers and the residents of Lumby.

My thanks…to Caitlin with FSB Associates for my review copy of The Lumby Lines by Gail Fraser.