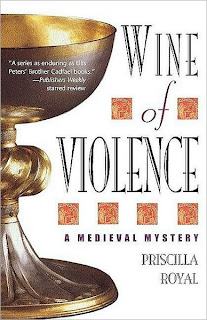 Wine of Violence by Priscilla Royal is a Medieval Mystery and one that I quite enjoyed. It’s not a very big book – only 228 pages – so it’s a nice way to pass an afternoon. I also discovered that this book is the first in a series; there are five more books after it and yes, I plan on continuing on to read the whole series when time allows.

Wine of Violence is set in the year 1270 in a priory on the remote East Anglican Coast. Eleanor of Wynethorpe has just been appointed to run the Tyndal priory where there are monks and nuns running a hospital – from what I’ve gathered this is called a ‘double house’. Tyndal has always been run by a woman but Eleanor is different. She is young, only twenty years old, and also very intelligent and fully capable of running things without help, which she fully intends to do much to the dismay of some of the monk’s.

When the prioress at Tyndal passed on, of course there had been plans of who the monks and nuns had picked to take over. Eleanor was appointed because of political reasons as was common back in those days. Her parents had always been loyal to King Henry III and this was their reward. This was a prestigious position for a lady of Eleanor’s age. There are a few who are very angry over this especially one sister in particular, Sister Ruth, who had been promised the position.

And to top things off, like Eleanor isn’t having enough trouble trying to gain control of the priory, a Brother is found brutally murdered and unfortunately that’s not the end of the deaths. Eleanor, along with Crowner Ralf (the local police I guess you would call him) begin to investigate but are baffled as to who could be committing these crimes. As well, new to the priory, is Brother Thomas who is there because of secrets in his own past. He’s young and smart and has caught Eleanor’s eye so now she’s battling sinful thoughts along with a murder.

Wine of Violence has really likable characters. I really enjoyed Eleanor’s character – for that time she was completely out of place being a strong female with a mind of her own plus intelligent being that she had been well educated. Another of my favorite characters was Sister Anne who helped run the hospital and definitely had an eye for solving mysteries. I don’t know a lot of the history surrounding this time but I hope to find out more along the way in my reading of this series. If you like a little history with your murder mystery, you may want to give this book a try. I’m glad I did – I enjoyed it and as I already stated fully intend to read more from this author.

My copy of Wine of Violence by Priscilla Royal was purchased by me for my eReader.