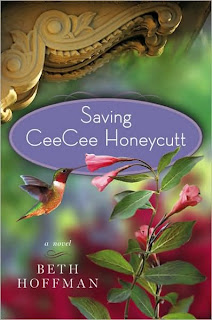 I’m excited to be able to offer up 2 copies of Saving CeeCee Honeycutt by Beth Hoffman. I have seen so many great reviews of this book. I can’t wait to read it – I’m participating in a blog tour for Beth in May so I have a ways to go before I read it unfortunately but it sure gives me something to look forward to. Here’s a bit about the book from Beth Hoffman’s website…

Twelve-year-old CeeCee is in trouble. For years she’s been the caretaker of her psychotic mother, Camille— the crown-wearing, lipstick-smeared laughingstock of an entire town. Though it’s 1967 and they live in Ohio, Camille believes it’s 1951 and she’s just been crowned the Vidalia Onion Queen of Georgia.

The day CeeCee discovers Camille in the front yard wearing a tattered prom dress and tiara as she blows kisses to passing motorists, she knows her mother has completely flipped. When tragedy strikes, Tootie Caldwell, a previously unknown great-aunt comes to CeeCee’s rescue and whisks her away to Savannah. Within hours of her arrival, CeeCee is catapulted into a perfumed world of prosperity and Southern eccentricities—a world that appears to be run entirely by women.

While Tootie is busy saving Savannah’s endangered historic homes from the wrecking ball, CeeCee encounters a cast of unforgettable, eccentric characters. From the mysterious Thelma Rae Goodpepper, who bathes in an outdoor tub under the watchful eyes of a voyeuristic peacock, to Oletta Jones, the all-knowing household cook, to Violene Hobbs, the loud-mouthed widow who entertains a local police officer in her yellow see-through peignoir, the women of Gaston Street keep CeeCee entertained and enthralled for an entire summer.

But CeeCee’s view of the world is challenged in ways she could have never imagined: there are secrets to keep, injustices to face, and loyalties to uphold. Just as she begins to find her ballast and experiences a sense of belonging, her newfound joy collides with the long-held fear that her mother’s legacy has left her destined for destruction.

Laugh-out-loud funny, at times heartbreaking, and written in a pitch-perfect voice, Saving CeeCee Honeycutt is a spirited Southern tale that explores the intricate frailties and strengths of female relationships while illuminating the journey of a young girl who loses her mother but finds many others.

I was born on an elevator during a snowstorm, a story my father often enjoyed telling whenever the opportunity arose. For the first five years of my life, I lived (along with my mom, dad, and older brother) on my grandparents’ farm in northern Ohio. It was a rural area, and other than a few tolerant garden toads, a highly social chicken, and Midnight, our family dog, there wasn’t anyone to play with. So I created imaginary friends. I’d draw pictures of them and build them homes out of shoeboxes—replete with interiors furnished by pictures I’d cut from a Sears & Roebuck catalog. Eventually I wrote stories about my friends, giving them interesting names and complex lives.

From earliest memory, there were two things I loved above all else: writing and painting. I wrote my first short story when I was eleven and sold my first painting at the age of fourteen. I believed the sale of the painting was a sign of what direction I should take in life. So I chose a career in art that eventually segued into interior design, but I still kept writing and dreaming of becoming a novelist. Life sent me on many creative journeys and I ultimately landed in Cincinnati, Ohio, becoming the president and co-owner of an interior design studio.

Years went by, long hours and hard work brought success, and with it came the inevitable stresses of business ownership. During the busiest year of my professional life, I nearly died from the same infection that took puppeteer Jim Henson’s life—group A streptococcal infection that resulted in septic shock. After finally being discharged from the hospital, I returned home to convalesce. I spent weeks reevaluating my life—the good, the bad, and the downright painful. As I struggled to regain my health and find spiritual ballast, my dream of writing a novel resurfaced. But no matter how I looked at it, there simply weren’t enough hours in the day to fulfill the demands of my career and write a novel. So I let the dream go.

Then, on a snowy morning in January of 2004, a complete stranger said something to me. And like an unexpected gust of fresh air, his words blew the door wide open. In an eye-blink I knew if I were to write a novel, it had to be now or never. I chose now. I sold my portion of the design business, and after a month of sleeping and meditating and realigning my energies, I plunked down at my computer. Day after day my fingers blazed over the keyboard, and I didn’t come up for air until I typed “The End” nearly four years later.

If there’s a moral to my story, it’s this: take a chance, embrace your dreams, forgive, let go, move on. And if life gives you a big smackdown, there’s a reason—and it just might lead toward your own little piece of the rainbow.

Oh, and there’s one more thing: be mindful of the words of strangers.

I have 2 copies of Saving CeeCee Honeycutt by Beth Hoffman to give away courtesy of Beth and her publisher at Penguin Books. To enter…

This giveaway is open to US & Canadian residents only as the books will ship to the winners directly from the publisher. I will draw for the winners on Sunday, March 28, 2010. Good luck everyone!