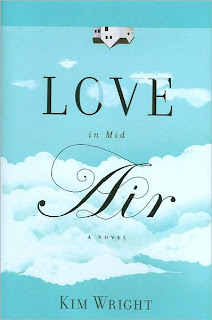 Welcome to Peeking Between the Pages Kim!  I read Kim’s debut novel Love in Mid Air and reviewed it yesterday (my review).  I enjoyed it.  It’s an honest and real look at a woman looking at options for herself whether it be divorce or just changing her life.  Kim has joined us today to share some thoughts on how she transitioned from a food and travel writer into a novelist…

People sometimes ask me how I transitioned from a food and travel writer into a novelist…which is too long and winding a story to report, so I usually just tell them that my nonfiction life and fiction life merge more often than I would have guessed.

Travel writers have lots of experience describing settings and place and that’s useful in a novel too. My debut novel, Love in Mid Air, is set in the South and you have to stop and really think about it to avoid falling into southern place cliches. It’s not all maganolias and marsh! And I’m always a little amazed by how often food works its way into my fiction. I can’t seem to resist telling readers what my characters are eating. (A writer friend of mine who is part owner of a dress shop has the same compulsion to describe her character’s clothes in detail.) My character Elyse hosts a Christmas party at one point in the book and I trot through the whole menu.

It’s funny because as the book has gotten closer to its pub date several of my friends have offered to hostess events such as book clubs and wine parties to help me along my way. Maybe it’s just because foodies tend to hang out with other foodies or maybe it’s because I went into such extreme detail about dinners in the book, but a couple of them are actually reproducing “recipes” from the book to serve at these parties. One sainted friend is recreating the entire Christmas dinner and another is taking the more whimsical route of serving “airplane food” right down to foil wrapped pretzels and little drink bottles in honor of the book’s first chapter. The running joke is that my next book is going to be Love in Mid Air II: The Cookbook.

A chance encounter with a stranger on an airplane sends Elyse Bearden into an emotional tailspin. Suddenly Elyse is willing to risk everything: her safe but stale marriage, her seemingly perfect life in an affluent Southern suburb, and her position in the community. She finds herself cutting through all the instincts that say “no” and instead lets “yes” happen. As Elyse embarks on a risky affair, her longtime friend Kelly and the other women in their book club begin to question their own decisions about love, sex, marriage, and freedom.

Kim Wright has been writing about travel, food, and wine for more than twenty years for many magazines including Wine Spectator, Self, Travel & Leisure, and Vogue, and has twice won the Lowell Thomas Award for travel writing. She is the food and wine editor for Charlotte Taste. She has written the annual Fodor’s Walt Disney World with Kids for 18 years and also writes erotica. This is her first novel. Kim lives in Charlotte, NC.
__________

Thanks so much for joining us at Peeking Between the Pages Kim!  I wish you luck in all your future endeavors and look forward to your next novel!

I have 5 copies of Love in Mid Air by Kim Wright to share with you courtesy of Miriam with Hachette Book Group.  To enter…

This giveaway is open to US & Canadian residents only (no PO boxes) as the books will be mailed out directly from the publisher.  I will draw for the winners on Saturday, April 24, 2010.  Good luck to you all!