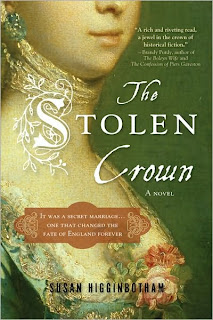 Welcome to Peeking Between the Pages Susan! Susan Higginbotham is the author of The Stolen Crown which I had the pleasure of reading and reviewing (my review). It’s a great work of historical fiction well worth reading! Susan was nice enough to take the time out of her very busy schedule to join us today and answer some questions so without further delay let’s see what she had to say…

1. Hi Susan, to start off today, can you share with us a bit about yourself outside of your writing career?

After I graduated from Virginia Commonwealth University in Richmond, Virginia, I worked in a variety of non-glamorous office and publishing jobs and got a master’s degree in English literature from Hunter College at the City University of New York. After that, my husband and I decided it was time to have children, so we had a boy and a girl, both of whom are teenagers now. (That was fast!) When my daughter was around two, I went to law school at Campbell University here in North Carolina and worked as a solo practitioner for a while until I found a job working for a legal publisher, which I’m still doing full-time today. I live with my husband and children in North Carolina, where I write my novels at a computer desk shoved into a corner of our kitchen.

Other than writing and reading, I enjoy traveling, wandering through old cemeteries, and collecting vintage Barbie dolls. I’m very fond of our cairn terrier, Boswell, and our three cats, whom I finally got around to including in my acknowledgments when I wrote The Stolen Crown.

2. What made you want to write about the Wars of the Roses this time around?

It’s a time period I’ve been interested in for a long time, and since I had been reading a lot about it, it seemed to be a natural progression, especially as so many characters in The Stolen Crown were descendants of some of the characters in my first two novels. This is such a dramatic time period, with treachery, loyalty, and sudden reversals of fortune, it’s fertile ground for the novelist.

3. Your novels always seem to feature strong women – is this strength of character something you find important to portray?

It is. I greatly admire women (and men) who can bear adversity with fortitude and demonstrate what Hemingway called “grace under pressure.” I don’t have much interest, however, in “kick-ass” heroines; I much prefer to read about a quieter, more enduring type of courage, the type of courage that allows a person to pull her life back together when all seems lost.

4. You put a lot of detail into your novels – how long did it take you to write and research The Stolen Crown?

Just about a year, although since I’d been reading about the Wars of the Roses before that, it wasn’t a matter of having to start from scratch with the research.

5. Do you strive to make sure that your novels are historically accurate? Do you think it’s important to do so?

Yes, I do, and I think it’s extremely important to do so, because some readers simply have no interest in reading nonfiction, so historical fiction is the only history they’re going to get. Of course, there are gaps that the novelist has to fill in—we don’t know, for instance, what Harry or Kate said to each other on any given occasion or what Harry and Richard, Duke of Gloucester thought of each other before 1483, but I think it’s very important for a writer to make her conjectures consistent with the known facts and the personalities of historical figures as we know them. We’re writing about people who can’t rise from the grave and set the facts straight, after all, so it’s vital that we honor their memory and not paint a distorted picture of them. At the very least, I think if an author plays fast and loose with known facts or portrays a historical figure in a way that’s not supported by the known details of his or her life, she should come clean about this in an author’s note.

6. What do you find most challenging/rewarding about writing historical fiction?

The most rewarding part, I’d say, is introducing readers to someone they might not have known much about or in getting them to see in a sympathetic light someone who’s previously been portrayed harshly, like Buckingham and the Woodvilles in The Stolen Crown or Edward II and the Despenser family in The Traitor’s Wife.

Research, I’d say, is the most challenging part, though I love doing it. Aside from the difficulty of researching some of the more obscure events or characters, there’s the dreaded situation where chroniclers give contradictory accounts of the same incident or of a person’s whereabouts, and the only thing that I can do is choose which one to follow and hope I’m right.

7. I love the cover of The Stolen Crown! Did you have any input on the design of it?

No, although it was shown to me when it was finished to make sure I didn’t have any objections. I didn’t; I loved it!

8. Would you have liked living back in the time of your novels? Why or why not? I know I wouldn’t! Having men order me around would kill me but I would have liked the clothes and being at Court though!

No, I’m quite happy living in the twenty-first century and visiting medieval life from afar. I wouldn’t want to face things such as the probability that one or more of my children might die young or that I myself might die in childbirth, for instance. And glamorous as court might have been, I suspect that after a while it might be like a corporate employee get-together where you constantly have to be on your best behavior and please your boss—I think that would wear thin very fast!

Just that I’m grateful to them for giving me a try, and I’m pleased that their numbers are growing! The Internet has been a great opportunity for writers to get the word out about their novels, and I’m very grateful to you and the other bloggers who host tours like this.

10. To finish our chat, what’s next Susan? What part of history are you delving into next?

I’m writing about Margaret of Anjou, Henry VI’s queen, who makes a brief appearance in The Stolen Crown. She’s the epitome of a strong woman—a woman who fought doggedly for the rights of her husband and her son despite suffering one defeat after another. She’s been much maligned by historical novelists as a sexually promiscuous, vengeance-crazed harpy, and I’m eager to present her own side of her story.

THE STOLEN CROWN BY SUSAN HIGGINBOTHAM—IN STORES MARCH 2010
On May Day, 1464, six-year-old Katherine Woodville, daughter of a duchess who has married a knight of modest means, awakes to find her gorgeous older sister, Elizabeth, in the midst of a secret marriage to King Edward IV. It changes everything—for Kate and for England.
Then King Edward dies unexpectedly. Richard III, Duke of Gloucester, is named protector of Edward and Elizabeth’s two young princes, but Richard’s own ambitions for the crown interfere with his duties…

Lancastrians against Yorkists: greed, power, murder, and war. As the story unfolds through the unique perspective of Kate Woodville, it soon becomes apparent that not everyone is wholly evil—or wholly good. 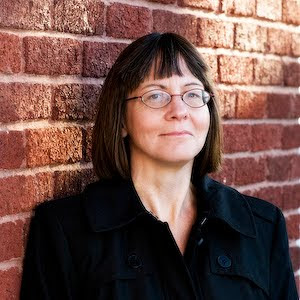 Susan Higginbotham is the author of two historical fiction novels. The Traitor’s Wife, her first novel, is the winner of ForeWord Magazine’s 2005 Silver Award for historical fiction and is a Gold Medalist, Historical/Military Fiction, 2008 Independent Publisher Book Awards. She writes her own historical fiction blog, Medieval Woman. Higginbotham has worked as an editor and an attorney, and lives in North Carolina with her family. For more information, please visit http://www.susanhigginbotham.com/
__________

Susan, thanks so much for taking the time to answer these questions for me. Your responses are fantastic! I can’t wait to read your next novel!
__________

Courtesy of Sourcebooks I have 2 copies of The Stolen Crown by Susan Higginbotham up for grabs! To enter…

This giveaway is open to US & Canadian residents only (no PO boxes) as the books will be shipped to you directly from the publisher. I will be drawing for the winners on Saturday, April 17, 2010. Good luck everyone!