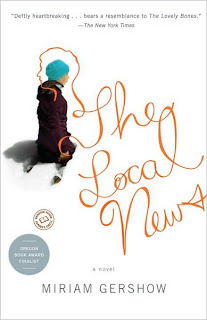 The Local News by Miriam Gershow is out in paperback! I read and reviewed Miriam’s novel when it was first out in hardcover and really enjoyed it (my review here). It’s an emotional story of a girl coming of age at a time of tragedy in her family. I think it’s a novel that would appeal to many and would also be a great novel to consider for your book clubs. Here’s a bit about the book from Miriam Gershow’s website:

“Going missing was the only interesting thing my brother had ever done.”

Even a decade later, the memories of the year Lydia Pasternak turned sixteen continue to haunt her. As a teenager, Lydia lived in her older brother’s shadow. While Danny’s athletic skills and good looks established his place with the popular set at school, Lydia’s smarts relegated her to the sidelines, where she rolled her eyes at her brother and his meathead friends and suffered his casual cruelty with resigned bewilderment. Though a part of her secretly wished for a return of the easy friendship she and Danny shared as children, another part of her wished Danny would just vanish. And then, one night, he did.

In the year following Danny Pasternak’s disappearance, his parents go off the rails, his town buzzes with self-indulgent mourning, and his little sister Lydia finds herself thrust into unwanted celebrity, forced to negotiate her ambivalent–often grudging–grief for a brother she did not particularly like. Suddenly embraced by Danny’s old crowd, forgotten by her parents, and drawn into the missing person investigation by her family’s intriguing private eye, Lydia both blossoms and struggles to find herself during Danny’s absence. But when a trail of clues leads to a shocking outcome in her brother’s case, the teenaged Lydia and the adult she will become are irrevocably changed, even now as she reluctantly prepares to return to her hometown.

Relentlessly gripping, often funny, and profoundly moving, The Local News is a powerful exploration of the fraught relationship between a brother and sister and how our siblings define who we are.

Here’s a bit about the author from Miriam Gershow’s website: 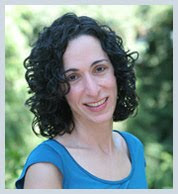 Miriam Gershow is a novelist, short story writer and teacher. Her debut novel, The Local News, was published by Spiegel & Grau in February 2009. It has been called “unusually credible and precise” and “deftly heartbreaking” by The New York Times, as well as “an accomplished debut” (Publisher’s Weekly) with a “disarmingly unsentimental narrative voice,” (Kirkus Reviews).

Miriam is the recipient of a Fiction Fellowship from the Wisconsin Institute for Creative Writing, as well as an Oregon Literary Fellowship. Her stories appear in The Georgia Review, Quarterly West, Black Warrior Review, Nimrod International Journal, The Journal, and Gulf Coast, among other journals. Miriam’s stories have been listed in the 100 Distinguished Stories of The Best American Short Stories 2007 and appeared in the 2008 Robert Olen Butler Prize Stories. She is also a past winner of the AWP Intro Journals award and has been nominated for a Pushcart Prize.

__________
The paperback of The Local News was released on February 9, 2010 and is a Random House Reader’s Circle selection which means there is an additional 14 pages which include a Q&A with the author, an author bio, and a Reading Group guide.

In addition, Miriam is one of the featured authors in this month’s Random House Author Chats which means that book groups can request Miriam’s participation in their book club chats. Remember when I said this would make a great book club pick. Well how much greater would it be if Miriam could join in your discussion of the book? Awesome, I’d say.

This giveaway is open to US & Canadian residents only as the book will be shipped directly to the winner from the publisher. I will draw for the lucky winner on Sunday, March 28, 2010. Good luck to you all!