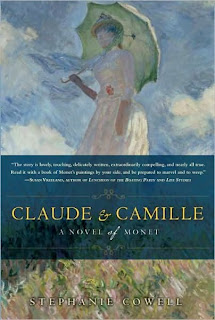 Claude & Camille: A Novel of Monet by Stephanie Cowell captivated me from the very beginning. Stephanie Cowell is a beautiful writer and I absolutely loved this book! This novel is about the painter Claude Monet who I knew very little about prior to reading this novel and his love affair with the beautiful Camille Doncieux. The author weaves fact with fiction to the perfect degree and I came away from this novel with a new found interest in not only Claude Monet but the Impressionist artists as a whole.

Claude Monet is a struggling young artist in Paris. He and his friends, Auguste Renoir, Frederic Bazille and others painted out of a studio apartment that they all came and went from. They had little food at times and really lived from one sale of a painting to another; that or from pawning whatever they could. I’m not sure why but I was really surprised by just how hard it had been for these now famous men to get their paintings recognized let alone purchased by anyone. They were a group of pretty much respectful young men just trying to make it in a profession that they loved more than anything.

The novel really is focused on Claude & Camille though. As a young man leaving his home in Normandy, Claude spots a young woman at the train station and is taken with her enough to sketch her. He gets on the train though and heads to Paris with only the sketch of this girl to remind him that she existed. Years later he happens upon a bookstore and it is she – Camille Doncieux – behind the counter. Thus begins what will be a relationship filled with anguish, sorrow, anger, happiness, and most of all love.

Camille Doncieux came from an upper class family that had high hopes for their daughter all the way to who they wanted for her husband and it certainly wasn’t some struggling painter called Claude Monet. As the author has stated in her notes there isn’t a lot of information on Camille but with what there was she fleshed out her character and she does a wonderful job. Even though Camille is an upper class girl she is also a girl who wants to go against the grain. When she and Claude come together one night the future is pretty much foretold.

They begin a life together but it’s a hard one. There is never enough money or enough food or enough anything. Claude is one of those men who doesn’t want his woman having to work – he takes care of his own. At times though Camillle does take on work. Later there is a child and even more struggles. What was interesting was in good times when Monet would sell some of his work they would live high, likely buying far more than necessary and then when the lows would come, they would owe everyone money.

Claude was a dreamer which is understandable. I think to be a great artist you have to be. He had dreams of giving the world to Camille. She was his everything – his great love, his muse, the woman he would do anything for. Claude was a man of great loves and passion – his painting, his friends, his children and most of all Camille. He wanted to eventually make enough money from his painting to buy Camille the most beautiful home in the country where they would live out their days together. Sadly, this was never to be. Claude Monet eventually does very well with his painting but Camille is not there to share the glory with him.

I was very drawn to Monet as a person in this novel. I found him very real and vulnerable, sometimes he angered me when his only concern was his painting but he intrigued me a great deal. The author gave us the heart of his soul in this novel and you can’t help but be touched by that. I have seen many of his paintings before and I do like them-most I think are beautiful – at one point in the book he says that you don’t have to understand his work, you only have to love it. I look forward to doing a little more research into this man’s life and art. This novel is at it’s heart a love story and yet so much more. I would definitely recommend it to anyone interested in good historical fiction as well as anyone fascinated with the arts. I was so taken with Stephanie Cowell’s writing that I purcased Marrying Mozart to read next! I know I won’t soon forget this wonderful story!

My thanks to Diane Saarinen for inviting me to participate in the book tour for Claude & Camille by Stephanie Cowell and the publisher for sending me my review copy of the book.