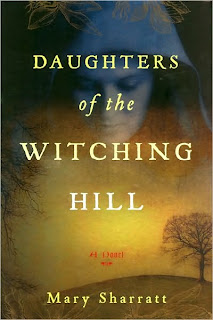 Bess Southerns has quite the reputation in Pendle Forest. As what you may ask – well as a witch! Really more of a blesser they called her back in the day but to those with a penchant for condemning witches; she was considered a witch along with the rest of her family. Daughters of the Witching Hill by Mary Sharratt brings us brilliantly back in time to relive a part of history with the Pendle Witch Trial and the crazy time when you could be accused of being a witch simply by looking at someone the wrong way and then being hanged for it.

Bess has lived in Pendle Forest her whole life. Not surprising she is descended from an important family in the area but was never recognized of course. She has a son Kit and a daughter Liza who has a droopy eye and because of this is considered a monster in the community. Later on Liza will have two children by her husband John – Alizon and Jamie. Further on after her husband dies and she has an affair with another man she has one more child Jennet who as far as I’m concerned was the only evil one in the family.

The family knows what it’s like to be poor and they know what it’s like to have enough; meaning enough to eat only. It all depends on the times and whether there is a good harvest or if people are willing to give them food for work. It was a really rough life and it was difficult to read the suffering that went on because they were hungry and were turned away by so many people on account of them being thought of as witches.

When Bess heals a young boy of a prominent family things get better for them for a while. She’s thought of as a blesser; one who can heal people or animals and many come to her for help. Bess is able to do this through a familiar – a spirit – who came to her and gives her the powers she has. Bess chooses to use her powers for good. However a friend of hers, Anne, begs to learn some of the chants and magic that Bess knows and Bess trusting her friend teaches her.

I would say that was the undoing of Bess and her family. Her grandson Jamie is born but is slow. Alizon however is perfect – she’s beautiful, smart, and caring. She also has the gift but in all the years of seeing what it has done to her family, doesn’t want to have anything to do with it. However at times Alizon can’t seem to control her anger and this is what happens when she meets a pedlar on the road and has words with him. She does curse him and although she doesn’t mean him actual harm, he walks away from her and collapses, paralyzed.

From this comes Alizon being questioned by the magistrate and later the whole family being questioned. Alizon is thrown in gaol and eventually so is the rest of her family. Not only that but many of the people who had reached out and helped the family over the years are also arrested. The charges where that they were performing witchcraft and bewitching people. They may have said something to someone and that person later fell ill and died and that was enough reason to call them a witch.

This is really a fascinating story as it’s based quite a bit on actual history- Bess Southerns and her family existed as did many others that are portrayed in the book. The witch trial really took place and her family really was hanged. I never fail to be horrified at how they treated individuals they felt were witches back in the 1500 & 1600’s. In England at the time, unlike other places, it was forbidden to torture those suspected of witchcraft, but still the living conditions they were kept in and the filth was torture enough, not to mention being hanged. It was downright scary to read that a person could be condemned for witchcraft simply by even a child accusing them of it. The powers that be would take anyone’s word for it when they were on a witch hunt.

This book is the perfect read for those interested in reading more on witch trials. Daughters of the Witching Hill really blends fact with fiction perfectly in this book and really draws you into the struggle of life for those who were thought to have anything to do with magic of any kind. You can purchase Daughters of the Witching Hill by Mary Sharratt for yourself here in the US and here in Canada and make sure to pop by and visit Mary Sharratt’s website as well!

Join me tomorrow as Mary Sharratt drops by Peeking Between the Pages with a guest post for us!

My thanks…to Diane Saarinen for inviting me to participate in the Book Tour for Daughters of the Witching Hill by Mary Sharratt and to the publisher for sending me my review copy of the novel.