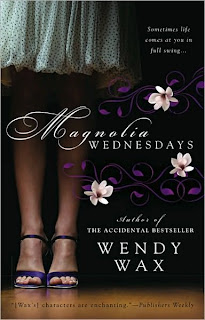 Magnolia Wednesdays was a really great read for me!  I had to laugh from the very beginning when Vivi, an investigative reporter, gets shot in the butt while covering a story.  She ends up on You Tube in a very embarrassing video that she is quite certain has been seen by everyone in the world.  After this Vivi’s life seems to unravel right before her eyes.  Not only is she without a job because she finds out she’s being replaced by someone younger and quits but she ultimately finds out the reason for her crazy outbursts seem to be because she is pregnant at forty-something.

Vivi decides to relocate to suburban Atlanta and stay with her sister Melanie and her kids Shelby and Trip.  Melanie’s husband passed away not long ago and while Vivi had gone out to be with her for a while, she wanted nothing more than to leave and get back to her life and job.  Vivi’s really never been one for spending quality time with her family.  Her idea of a visit is in and out.  It so happens that while Vivi is desperately trying to land herself a job she comes up with the idea of going to live with her sister and writing a column about the suburbanites in Atlanta from an outsider looking in.

Vivi finds she has more than enough material to write several columns.  She follows her sister, niece and nephew around and finds that the people around them and their lifestyle in general provides her with all kinds of angles to write about.  As her column becomes known in Atlanta people are running her down like crazy saying she has no right to write such downright mean things about them.  However nobody knows it’s her writing this column as she is writing under a false name, Scarlett Leigh.

As time wears on though and Vivi’s pregnancy becomes much more noticeable, Vivi finds herself starting to really like these people.  Not to mention how close she’s becoming with her sister Melanie.  Vivi had no idea how much Mel had to deal with on a daily basis as a single mother and she is in awe of her.  In the beginning Vivi actually believed what she wrote but as time goes on she realizes that really these people are all doing the best they can for their families and all she’s doing is hiding behind a name.

I really liked Vivi because aside from her many flaws she really is a likable character.  The only thing she drove me literally crazy on was her inability to let her boyfriend know she was pregnant.  Stone is a reporter as well but he works from war torn countries and that’s where he was stationed during her pregnancy.  She didn’t want him to worry and be distracted and therefore doesn’t tell him about the baby.  At these times I just wanted to give her a big slap upside the head because it wasn’t fair to keep it from him. Other than that I loved how she grew as a person and realized the importance of family before it was too late.

Magnolia Wednesdays had it all for me – it had me laughing at times and crying at others.  It is a novel that is funny and heart warming with a few twists thrown in for good measure.  Aside from Vivi, the whole cast of characters are great and you find yourself really beginning to feel a part of their lives as you flip through the pages.  I will definitely be reading more of Wendy Wax in the future!   You can see more about Wendy and her books on her website!

My thanks to…Joan Schulhafer Publishing & Media Consulting for my review copy of Magnolia Wednesdays by Wendy Wax.