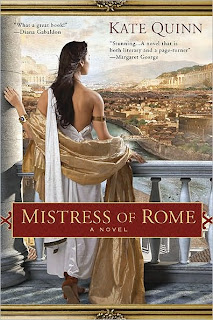 Every once in a while you get one of those books that is absolutlely impossible to put down until you turn that last page.  Mistress of Rome by Kate Quinn was that book for me!  I swear I was in Ancient Rome because every word and every page took me there!  This book has it all:  emperors, slaves, gladiators, betrayal, lust, love, jealousy, romance and the list could go on and could the cover be any more gorgeous!

The story begins by introducing us to Thea, a young slave girl from Judaea, who was bought for the very spoiled heiress Lepida Pollia.  The story really is based on the rivalry of these two throughout the novel.  It begins when Lepida, only fourteen herself, takes a shine to the gladiator, The Barbarian.  The problem of course is that eventually he has eyes only for Thea and she for him.  Lepida, enraged, sells Thea back into slavery.

Thea ends up working in a brothel but catches the eye of a good and kind master who helps her succeed as a singer while also protecting her son, Vix.  However for Thea, now Athena, peace is not to be hers.  She catches the eye of Emperor Domitian who decides he wants her for his very own plaything and what he wants, he gets.  Emperor Domitian, unknown to most, has a darker side and he takes much pleasure in bringing Athena to the edge of madness.  Her time with him is a struggle just to survive; to not lose herself in the craziness.  The author takes us to the limits of a world caught up in the evil of the Emperor.  There is scheming, back stabbing and killing.  What will ultimately be the fate of the Roman Empire?

There are a lot of characters in this novel although I had no trouble following their lives.  At times though I was a little confused as to whose point of view I was getting as it’s written in first and third person but as you get used to the story this becomes much easier to follow.  They are all well developed enough that you feel invested in their lives in one way or another.

Thea by far was my favorite character.  She’s passionate, strong, and loyal; willing to fight for what she wants and who she loves.  By far the most colorful, evil and conniving character is Lepida – you will hate her.  She has absolutely no redeeming qualities whatsoever and my blood pressure would rise every time she came on the scene.  The hate these two feel for each other sparks many of the ways their lives end up unfolding.  But then there is Arius who I adored and his and Thea’s son Vix who had me laughing out loud.  He’s described as an appalling child but really I found him quite charming.

Kate Quinn has created a rich and wonderful world in Mistress of Rome.  She writes in such a vivid and descriptive way that when she portrays the gladiator fights you’ll think you’re in the thick of it.  Then there are the descriptions of the clothing, jewels, the places they live, the Emperor’s parties – it’s all so well crafted.  I found myself really caring about the people in this story  – practically holding my breath to find out their fate.

Kate Quinn has mixed fact with fiction in Mistress of Rome, her wonderful debut novel.  As I came to the end of the story I was happy with how it ended and even more happy that she left the storyline wide open to continue.  Mistress of Rome releases today and you can purchase your copy here in the US and here in Canada.  Check out Kate Quinn’s website and blog as well!  Be sure to pop by tomorrow as Kate shares a guest post with all of us.

My thanks… to Kaitlyn with Berkley (Penguin Group USA) for my review copy of Mistress of Rome by Kate Quinn.